As pancreatic cancer develops in the body, it may cause a few different symptoms. The symptoms and severity can vary for each person and below we talk about what the disease is and how it may present itself as symptoms.

What is the pancreas? 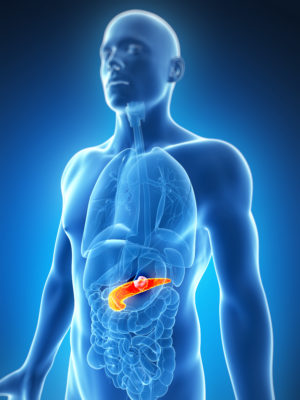 The pancreas is a pear-shaped organ deep in the body behind your stomach and in front of your spine. Its role in the body is to produce hormones to control your blood sugar levels and to enzymes which help to breakdown and digest your food.

Therefore, knowing the signs and symptoms of pancreatic cancer is key. The earlier the diagnosis, the better the outcome.

What are the symptoms of pancreatic cancer?

Early stages of pancreatic cancer can show no symptoms at all. However, a new diagnosis of type 2 diabetes, especially if it is not associated with being overweight can be an early sign. In fact, research has found that those who are diagnosed as diabetic have a 50% greater chance of getting pancreatic cancer within four years than those who have been diagnosed for longer.

Symptoms of pancreatic cancer include

How long does it take symptoms to show?

Many researchers have found that the development of pancreatic cancer from first to advanced stages can be quite slow giving time for diagnosis and to act. There is no set time when symptoms first appear, but the cancer can progress quickly once it is in the later stages, so it is important to be aware of the symptoms and act on them fast.

We understand that for anyone who shows symptoms of pancreatic cancer and is worried, it can be a very stressful time. The important thing is not to panic and to explain your concerns to your GP. The Pancreatic Cancer Action website has more information on symptoms and what pancreatic cancer is.

For more detailed information on the signs and symptoms of pancreatic cancer, click here.