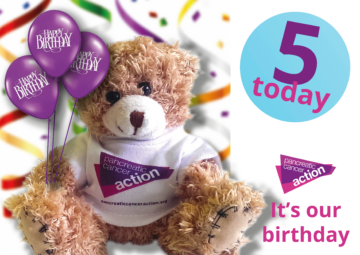 Nationwide charity Pancreatic Cancer Action, which exists to save lives by driving early diagnosis of the disease, celebrates its fifth anniversary this month.

The charity was set up by survivor, Ali Stunt, who has had first-hand experience of the life-changing events of being diagnosed with pancreatic cancer, with the goal of trying to help others in similar circumstances.

Pancreatic Cancer Action aims to improve awareness of the signs and symptoms of pancreatic cancer to the public through media campaigns, to fund educational programmes for clinicians including GPs and hospital doctors, to provide comprehensive patient information and to fund research specifically to improve earlier diagnosis.

Ali Stunt was diagnosed with pancreatic cancer in 2007 aged just 41. After experiencing symptoms including back pain which she describes as like a ‘tennis ball strapped to the middle of her back’, pain on eating and unexplained weight loss.

“As a survivor, I want to offer some form of hope to others who have found themselves in the same situation I did in 2007,” says Ali.  “And I will be campaigning so that more people will be able to have the same outcome that I had.

“Five years ago, I was sat in my spare bedroom, excited to be starting Pancreatic Cancer Action and making a difference in whatever way I could.  I never imagined that we would be where we are today, raising awareness on a global scale; having produced an award winning pancreatic cancer advertising campaign, educating the medical community through our e-learning modules and educational seminars  and funding early diagnosis research projects.

“We have achieved an awful lot in the past five years and none of this would have been possible without the tremendous support we receive from the general public.  Thank you to everyone who has fundraised, donated, raised awareness and supported us in any way.”

Sandra Francis, from Evesham, whose husband Pete died of pancreatic cancer, and raises funds and awareness for the charity said: “The work that PCA do in raising awareness and hopefully getting earlier diagnosis is amazing.  Their information for GPs is so important.

“I often wonder if when Pete first felt ill in September 2011, had that GP been able to recognise the symptoms and send him straight away for a CT scan and if Christmas and New Year holidays had not come inbetween – would that tumour have been removable.  I don’t dwell on this, but I do know that early diagnosis is so important and if I can do anything to help others get a quicker diagnosis than Peter did then I would like to think I have helped in some way.“

Pancreatic Cancer is the UK’s fifth biggest cancer killer and 24 people die a day from the disease. The 5 year survival rate is just 4%, a figure which has barely changed in over 40 years. Most pancreatic cancer patients are diagnosed too late. Pancreatic Cancer Action is determined to get more patients diagnosed early and in time for
life-saving surgery.