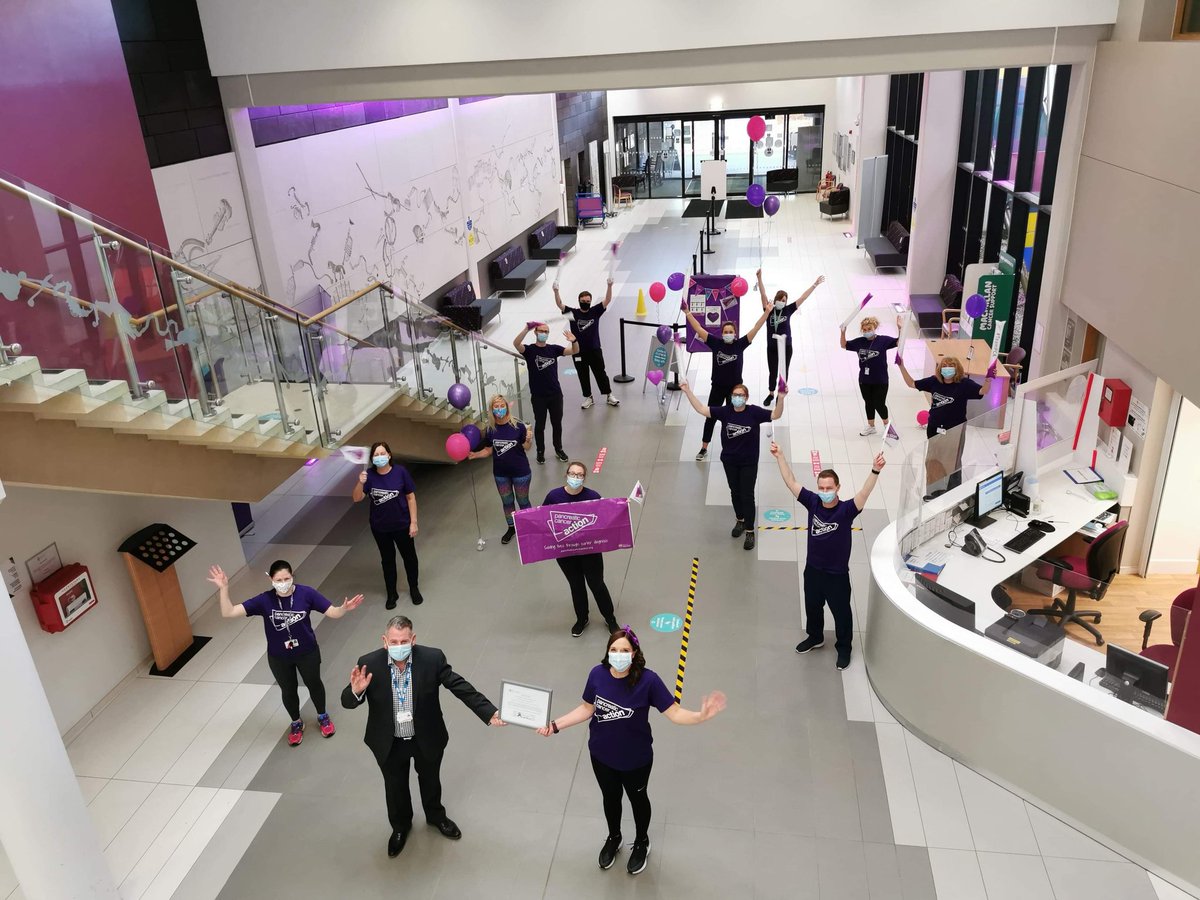 The end of November marks the end of another incredibly successful Pancreatic Cancer Awareness month (PCAM)! We are absolutely blown away by the amount of support that we have received throughout the month. Considering the current circumstances, everyone still came together and raised an amazing amount of awareness and funds for pancreatic cancer to get the disease noticed!

We had so much support from everyone including people Turning it Purple, lighting it purple, taking on a challenge, raising awareness of the symptoms, fundraising, participations from businesses, MPs and MSPs, cancer alliances and people sharing their story to raise awareness. We

want to say a huge THANK YOU to you all because we could not have done any of it without you. You have all helped to make a massive difference and we are so grateful.

Throughout the month we have had an extra push on raising awareness of the symptoms of pancreatic cancer to reach more people than we ever have before. This started at the beginning of the month and we have seen an incredible amount of social media shares of our symptoms post. This means that so many of your friends and families and their friends will have seen the symptoms of pancreatic cancer that could potentially save a loved one’s life.

We also launched the first ever symptoms awareness TV advert in Scotland that featured on STV for 2 weeks. We are thrilled with how successful this was and how many people saw it and engaged with us because of it. The advert featured one of our amazing supporters talking about the symptoms of pancreatic cancer and how he sadly lost his dad to the disease. This was complimented with online and billboard advertising to make an even bigger impact. 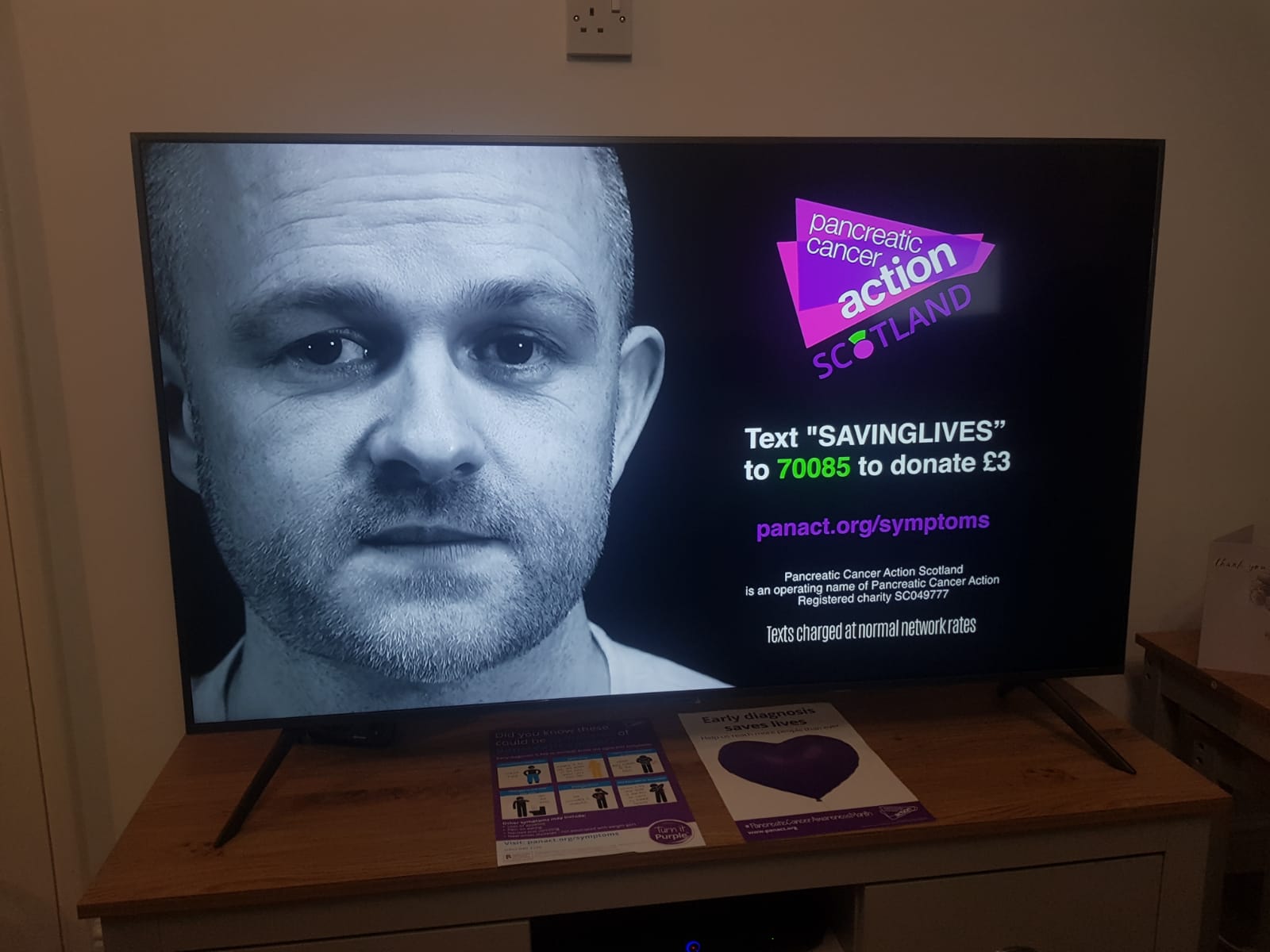 Through raising awareness of the symptoms and directing people to our symptoms page on our website, we saw a huge spike in website and page visits which we were so pleased to see. Thank you to everyone that shared the symptoms as this has helped to raise so much awareness and hopefully lead to earlier diagnosis for people suffering.

Take a look at all of your fantastic Turn it Purple photos here.

Throughout the month we were also raising awareness in the media, with many of our supporters activities being covered in their local press. We also had some incredible patient stories covered with one survivor, Sue, being featured in the Express and on BBC South Today as well as on the BBC website!

On World Pancreatic Cancer Day we were featured on 12 radio stations speaking about the pancreatic cancer and why it is so important to be aware of the disease.

As part of PCAM this year, we engaged with politicians across the UK to raise awareness of the stats around pancreatic cancer and the importance of early diagnosis.

We highlighted the issue of socioeconomic deprivation and how those in more deprived areas are diagnosed with cancer more often, at a late stage and with worse outcomes and survival. We offered our support to MSPs in changing the stats around pancreatic cancer and requested their support in attending the debate and raising awareness in their constituencies.

Furthermore, we wrote to every MP across the UK, asking them to support PCA this November and use our resources to raise awareness of pancreatic cancer.

We have had a great response and there was an excellent debate where MSPs were able to discuss local challenges to early diagnosis of pancreatic cancer in their area.

Furthermore, we have worked more closely than ever before with cancer alliances and those running cancer services across the UK. We collaborated with Surrey and Sussex cancer alliance to raise awareness and promote our services among GPs and pharmacists. Alongside this, we worked with the Lancashire and South Cumbria cancer alliance to raise awareness across GPs, hospitals and the public. As a result of this, we were able to promote our E-learning modules to help health care professionals diagnose pancreatic cancer early as well as raising awareness in local communities. 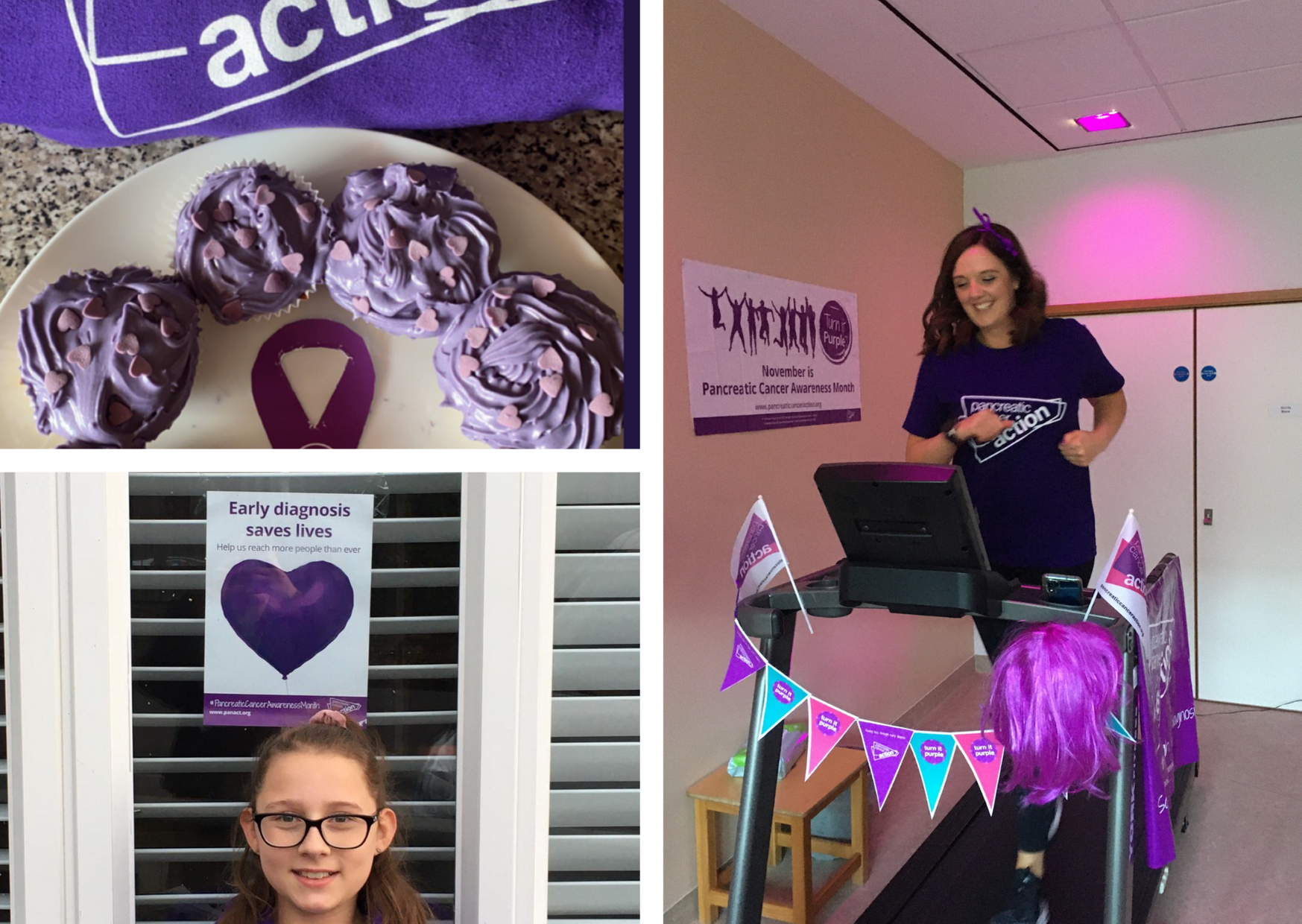 So many of you took part in fundraising activities throughout the month and we are thrilled with the amount of engagement we have seen during the month.

We want to take this opportunity to thank each and every single one of our fantastic supporters who have, despite the current climate, made this one of the most memorable Pancreatic Cancer Awareness Month to date!

We have seen some brilliant fundraising activities “go virtual” from raffles, quizzes and running challenges and had some fantastic support from all our corporate partners across the whole of the UK. Not only have our supporters raised a significant amount of funds this month, but you have raised so much awareness for pancreatic cancer – sharing our #PurpleHeart poster and information about the symptoms across social media.

Together we definitely turned the month purple, and we are extremely proud and grateful for all your support. We smashed our original £5,000 target on our JustGiving page so increased it to £10,000 which we have nearly reached! It is still not too late to make a donation towards our vital work to make the 2020’s the decade of change for pancreatic cancer – https://www.justgiving.com/campaign/turnitpurple

Thank you again, we are looking forward to what 2021 brings and know that we can continue to make strides and make it the decade of change for pancreatic cancer. Together we can make a difference.