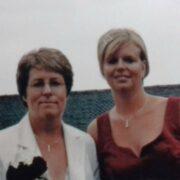 Nicola Smith reflects on her mother, Bea Walton, and her experience with pancreatic cancer on what is the 5-year anniversary of her passing.

In March 2015, my mum, Bea Walton, was sadly diagnosed with pancreatic cancer, aged 60. The first signs for her were when she started burping a lot, and then jaundice.

She underwent the Whipple operation at North Staffordshire Hospital, and then after that, chemotherapy at South Cheshire Hospital.

Sadly, the chemotherapy didn’t work, and the cancer spread to other parts of her body. Seeing my mum lose her hair and being unable to eat because of the sores in her mouth due to the chemotherapy was heartbreaking. She lost so much weight.

In October 2016, mum deteriorated very quickly and sadly lost the battle against pancreatic cancer on the 13th November, 2016. Mum left behind my dad, brother, sister, me and several grandchildren.

I suppose we were lucky, if you could call it that, in the fact that we got to spend 18 months with her after her diagnosis. She got to see her youngest granddaughter (at the time) celebrate her first birthday.

Mum also planned her own funeral down to the music, and also wrote heartwrenching letters to all her grandchildren.

I just wish that we had known the symptoms of pancreatic cancer beforehand, and maybe she would still be with us today.