A Cancer Research UK report published yesterday (Tuesday 25th February) in the British Journal of General Practice has come out with some shocking findings.

According to the report, thousands of people are being diagnosed with late-stage cancer in A&E due to GPs repeatedly misreading their symptoms, with nearly a quarter of patients visiting their GP three or more times before being diagnosed as an emergency.

Sadly, these results are no surprise to us as at Pancreatic Cancer Action; a patient survey that we carried out in 2015 found that before referral for tests, 40% of patients had visited their GP four times or more and 10% had over ten appointments with their doctor.
While no early detection test exists, early diagnosis is the key to improving the dire survival statistics of pancreatic cancer.  When pancreatic cancer is diagnosed at an early stage, treatment options and chances of a full recovery significantly increase. Over 30% of pancreatic cancer patients diagnosed with the earliest stage of disease survive at least five years, compared with a survival rate of 5% of a patient diagnosed.

A recent survey of GPs carried out by Research Now (commissioned by Pancreatic Cancer Action 2015), showed that only 3% of GPs feel fully confident and informed about pancreatic cancer symptoms. The difficulty in recognising these symptoms was deemed to be the main barrier to diagnosing patients early. 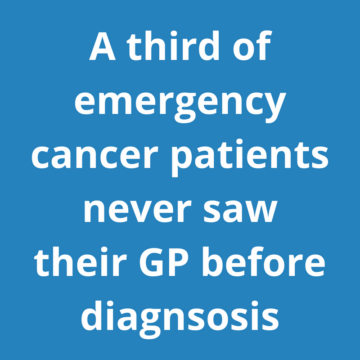 Worryingly, the CRUK report also found that around a third of cancer patients had not once consulted their GP about a relevant problem before diagnosis and existing figures show that nearly half of pancreatic cancer patients are diagnosed as an emergency in our A&E system.

So why are people not going to the doctors? The awareness survey found that 39% of people are worried about wasting the doctors time and over a third of respondents are too embarrassed to go and see the doctor.
Ali Stunt, chief executive of pancreatic cancer and a nine year survivor said: 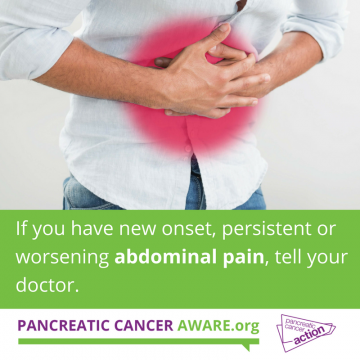 “For me, my early diagnosis was a product of both persistence and circumstance.  Persistent by my frequent visits to my GP, out of hour’s doctor service and to A & E as my instinct told me something was wrong, and I was not reassured by diagnoses of irritable bowel syndrome and indigestion for my symptoms.

If you would like to find out more about our symptom awareness campaigns and get involved click here.