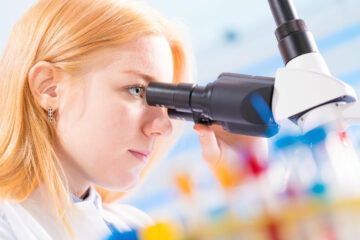 The results of an early (phase 1b) clinical trial for pancreatic cancer show that an experimental therapy can control tumors well enough to make some patients eligible for surgery, according to data published in The Lancet Oncology by a Wilmot Cancer Institute investigator.

Since surgery currently provides the best chance for survival of pancreatic cancer, any research that helps to move more patients toward that goal is exciting, said lead author David C. Linehan, director of clinical operations at Wilmot and Chair of Surgery at theUniversity of Rochester Medical Center.

This study is also significant, Linehan said, because there is no consensus on the best way to treat locally advanced pancreatic cancer that cannot immediately be removed. The median five-year survival rate is less than 5 percent. Doctors typically use chemotherapy and combinations of other therapies to try to control the disease.

Linehan’s small, phase 1b study enrolled 47 patients with locally advanced pancreatic ductal adenocarcinoma, the most common type. Most patients received an experimental immune-stimulating drug (a pill) developed by Pfizer Inc. known as PF-04136309, plus a standard four-drug chemotherapy regimen. A few received chemotherapy alone.  The majority of the patients who received the new drug saw their tumors stop growing and some patients experienced a partial response, which means their tumors shrank by more than 30 percent. One patient’s tumors completely disappeared, Linehan said.

Investigators had predicted that only 25 percent of the pancreatic cancer patients taking PF-04136309 would respond—but the trial’s response rate was nearly double the rate for people treated with chemotherapy alone. The trial results also concluded that the targeted, experimental drug in combination with chemotherapy was safe and tolerable.

Linehan has agreed to partner with Pfizer to lead a larger, phase 2, randomized trial to further test the drug in patients with metastatic disease, whose prognosis is to survive six to 12 months.

Some patients at the Wilmot Cancer Institute will likely be eligible to participate in the new clinical trial, Linehan said.

Most side effects from PF-04136309 were no worse than with standard chemotherapy, although three patients withdrew from the study due to treatment toxicity, the study authors reported.

Pancreatic cancer has a unique characteristic that’s the focus of Linehan’s research: Approximately 80 percent of a pancreatic tumor is comprised of cells that are not cancer cells. Many of these non-cancer cells, called tumor-assisted macrophages (or TAMs) however play a vital role in promoting cancer and preventing the immune system from attacking cancer cells.

Linehan primarily investigates the TAMs in the dense tissues and cells surrounding pancreatic tumors, often referred to as the “microenvironment.” He discovered that patients with pancreatic cancer who also have high levels of TAMs in their tumors are more likely to have a recurrence of cancer after surgery.  In earlier mouse studies he found that PF-04136309 blocked the mobilization of these cells. The phase 1b trial confirmed those results.

In the clinical study, researchers also wanted to know if PF-04136309 was hitting the intended molecular target, a receptor known as CCR2 on inflammatory monocytes (the precursors of TAMS). Scientists described in Lancet Oncology the mechanisms by which PF-04136309 inhibits CCR2 and also reduces the number of cells critical for sculpting the harmful microenvironment. When used in combination with chemotherapy, the drug also appeared to galvanize a proper immune response in the patients.

The clinical trial results were initially presented at the American Society of Clinical Oncology (ASCO) 2015 Gastrointestinal Cancers Symposium. ASCO experts not associated with the study were enthusiastic about PF-04136309’s potential as a promising new therapy for pancreatic cancer, Linehan said.

Linehan began working with Pfizer at Washington University in St. Louis before joining the University of Rochester School of Medicine and Dentistry in 2014. Study funding was provided by the Washington University/Pfizer Biomedical Collaborative, as well as Linehan’s awards from the National Institutes of Health and the Pancreatic Cancer Action Network. Pfizer is also supporting the phase 2 study.

The University of Rochester Medical Center is home to approximately 3,000 individuals who conduct research on everything from cancer and heart disease to Parkinson’s, pandemic influenza, and autism. Spread across many centers, institutes, and labs, our scientists have developed therapies that have improved human health locally, in the region, and across the globe. To learn more, visit urmc.rochester.edu/research