Ask your MP to attend the debate on 8th September 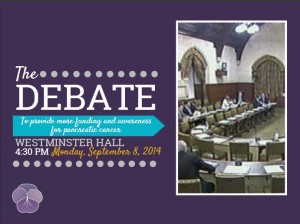 Can we please ask that you write a letter to your MP as soon as possible asking them to attend the debate. We have pasted a template letter/e-mail below for you to adapt and use if you wish, which can be downloaded here: MP-template-letter-Debate 8th September

If you are unsure who to write to, find your MP here.

It’s important that we get as many MPs as possible to support this.

Thank you for your help!

As a member of your constituency, I am writing to you to ask you to attend an important debate on 8th September 2014 that could literally change lives of patients and families affected by pancreatic cancer.  With just a three per cent survival rate, diagnosis of this disease leaves patients and families with little hope of a happy outcome.

<insert your personal story here e.g. I lost a loved one to pancreatic cancer, a disease I’d never heard of, in XX…>

The fifth biggest cancer killer in the UK, pancreatic cancer has been little known, poorly understood and chronically underfunded for decades.

The debate will take place between 4:30pm and 7.30pm in Westminster Hall, and the backbench committee will be discussing providing more funding and awareness for pancreatic cancer, which is set to become the UK’s fourth biggest cancer killer by 2030.

This follows a successful petition, which passed the 100,000 signature mark in April, started by Maggie Watts.

Maggie from Scunthorpe started the petition following the death of her husband Kevin, who lost his battle with pancreatic cancer in 2009 aged 48, 40 years after his mother died of the same illness.  In the 40 years between Kevin and his mother’s death, the five year survival rate of just 3% has not changed.

The need for this debate is even more urgent following a question posed by Luciana Berger, Public Health Shadow Minister on 31st March, which highlighted a decrease in overall cancer funding of almost £19 million between 2012 and 2013.  Considering pancreatic cancer already receives a tiny proportion of cancer research funding, less than 1%, the impact of this on future pancreatic cancer research is alarming.

The UK lags behind the rest of Europe in terms of the one-year survival rate for pancreatic cancer.  The UK average is 17 per cent, the European average is 21 per cent and the best in Europe (Belgium) is 28 per cent.

Please help to change outcomes for pancreatic cancer patients now and the future by attending the debate.  We need as many MPs to come forward and participate in the debate. If you are considering attending, please contact Mr Nic Dakin MP via email: nic.dakin.mp@parliament.uk

Please could you also consider getting involved in the APPG Inquiry on Pancreatic Cancer Research where along with your parliamentary colleagues you can help support the inquiry into pancreatic cancer research?

I would be happy to talk to you about this further either over the phone or in person.

I look forward to your response and thank you in advance.