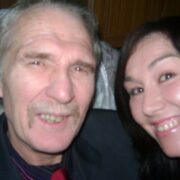 “My whole life, I can never remember my dad being ill”

Marianne Dyball shares the story of her father, Arthur, who had very rarely been ill before his diagnosis.

My dad had just retired from the oil rigs, finally. He was 74 when he was diagnosed. He had stomach pain for a few months, went to the doctor and they did some tests.

In December 2015, we went to get the results and were told he had cancer. He had started to go yellow with jaundice very quick. In January 2016, he was rushed into hospital for an operation. He was unable to get chemotherapy, and we sadly lost him on the 6th of June 2016.

To watch my strong dad disappear in front of my eyes and know nothing could be done was absolutely devastating.

My whole life, I can never remember my dad being ill. He was fit, and for his work on the rigs, got a regular medical. It’s a horrible cancer and can go undetected for a while. The doctors think my dad had it for a while.