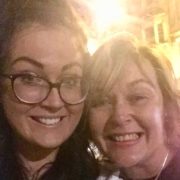 “This cancer has affected my family in such a huge way, and yet I’d never even heard of pancreatic cancer until 2016”

Lucy Patterson shares her experience with this disease, after losing both her mother & grandmother.

This cancer has affected my family in such a huge way, and yet I’d never even heard of pancreatic cancer until 2016, when my beautiful paternal grandma passed away from it after battling it for six months.

Two years later, in September 2018, my beautiful mum was then diagnosed with it. As she’d watched my Grandma suffer less than two years earlier, my mum knew the symptoms. But when she would go to the GP, he would turn her away as she was ‘too young’.

However, she knew deep down something wasn’t right, so she pushed and eventually was sent for a scan, which showed she had a shadow on her pancreas, which unfortunately turned out to be pancreatic cancer.

My beautiful mum passed away four months after being diagnosed, meaning I lost both my amazing mum & grandma to this horrible disease in the space of two years. The worst thing about it was the fact that I lost my paternal grandma, my mum and grandma weren’t even related, which shows how common this horrific cancer is.