Lockton raises an incredible £67,200 for Pancreatic Cancer Action after a successful year of fundraising 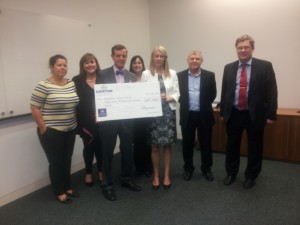 Since selecting us as their Charity of the Year over a year ago, Lockton Associates in the UK have together raised over £67,000 for us, involving numerous challenges and events taken on by scores of enthusiastic and supportive employees.

Associates have taken part in everything from gruelling cycle challenges to charity poker nights, and from dress up days to marathons.  It was truly remarkable the lengths people went to, to raise awareness and funds to help us in our fights against the fifth biggest cancer killer.  Alex Boswell, for example, completed two marathons and trekked 54 miles while Jamie Simon took part in the first ever white collar fight night for the insurance industry.

Ali Stunt, CEO of Pancreatic Cancer Action, said; “We are so grateful to Lockton for a brilliant year of fundraising for us.  They raised an amazing amount and it is such a fantastic result for a workforce of 750 employees.

“As a small charity, this is a significant amount of money for us and will have a direct impact on our work: helping us to raise awareness of pancreatic cancer, educate the public and medical community and fund vital research.”

Lockton is the world’s biggest private insurance broker. The company was founded in Kansas City in 1966 by Jack Lockton, who lost his own battle with pancreatic cancer in 2004, six years after his diagnosis.

Pancreatic Cancer Action (PCA) is a national charity founded in 2010 by a rare 5-year survivor of the disease. With a focus on early diagnosis, PCA aims to improve the currently dire survival rates through medical education, greater public awareness, better disease information and research specifically to improve early diagnosis.

Since 2009, Lockton Associates in the UK have together raised more than £350,000 for four Charity Partners, an outstanding effort from a workforce of 750 Associates. Previous Lockton Charity Partners have included Help for Heroes, Macmillan Cancer Support, Alzheimers Society and Whizz Kidz.

“I would like to say a huge thank you to the Charity Champions, led by Simon Coleman COO, the fundraisers and everyone at Lockton who put so much time into supporting us,” continues Ali. “We wish everyone at Lockton UK every success in both the company’s future and their work with future charities.”