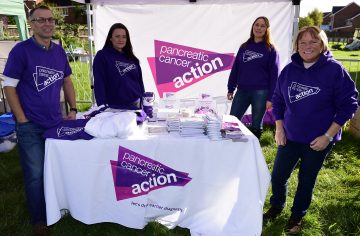 A Football Club took part in a Charity Football match to raise money for a charity close to the heart of a popular local man, Mark Bell, who used to run the club. Mark held the charity football match and family fun day on Sunday 16th October at Farnham Town football club for Pancreatic Cancer Action.

Mark and his partner Tina raised over £3000 by holding the match as well as other activities including a performance by Grizzly Rhys Morgan, face painting, a raffle and auction, a bouncy castle, food van and a cake sale.

Mark said: “I used to run the Weybourne football club and when I was diagnosed with pancreatic cancer a few of the lads came to me saying they would like to do one last match which is why we organised the event to raise money for Pancreatic Cancer Action. We set up a Facebook page and invited everyone who had ever played for the team to come along to the day asking for a £10 fee to play and a £5 fee for every yellow card.”

Mark, who wouldn’t have gone to the doctors without the encouragement of his partner, was recently diagnosed with pancreatic cancer. This was confirmed after experiencing severe abdominal pain that got worse which was misdiagnosed as digestive problems by his GP. After being rushed to hospital with acute pancreatitis and finding a mass on Mark’s pancreas it was confirmed that he had pancreatic cancer. He is now having chemotherapy to try and make the mass smaller which will allow for the doctors to perform surgery.

Pancreatic Cancer is the UK’s fifth biggest cancer killer and 26 people die a day from the disease. The 5-year survival rate is just 5%, which is the lowest survival of all 22 common cancers.

Unfortunately, most pancreatic cancer patients are diagnosed too late. Pancreatic Cancer Action is committed to working towards earlier diagnosis of the disease so that surgery, currently the only cure, is made available to the sufferer.

Mark says “The event was a great success as we had a £2000 target but managed to raise over £3000. I want to say a massive thank you to my wife Tina for all of the support she has given me as well as a thank you to everyone who came along, played and held a stall for us – you were all great! Also, thank you to Farnham Town football club for donating your facilities to us, without them it couldn’t have been a success.”

“As a charity, we rely on the generosity of individuals like Mark to help us continue our vital work. Please back Mark and Tina in their fundraising efforts so that we can continue research into early diagnosis and raise awareness of pancreatic cancer.”