Runner, James Hornby, from Maidenhead has taken on the massive challenge of running a 64km ultramarathon, full marathon, AND half marathon in the space of just two weeks. He has completed these races in the extreme tropical conditions of  Vietnam and Cambodia raising money for charity Pancreatic Cancer Action.

James was motivated to take on this challenge after recently losing a very good friend from school and Maidenhead Rugby Club, Mark Robinson, to pancreatic cancer as well as losing his uncle, Ian Bott, from the disease a few years ago.

He says: “Both were great people with lovely families and I wanted to do something to honour them and raise some money for this worthwhile charity in their name.”

I have run a few marathons previously and enjoy the challenge of distance running, but I am an old front row rugby player and am certainly not suited to long distance running”. 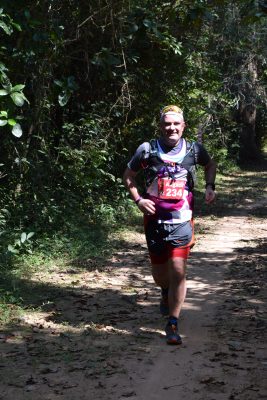 James, who now lives in Vietnam, completed the half marathon around Ho Chi Minh City on the 7th January and ran the Ho Chi Minh City Marathon on the 15th. Finally, he will be ran the biggest challenge of the Angkor ‘Bayon Trail’ Ultra Marathon; a 64km trail run held in Cambodia on January 21st.

James smashed his target of £750 raising over £1,200! He says “The runs went well, obviously the last one, the 64km run, was the biggest challenge but the legs held up OK and are nearly back to normal now. I finished all 3 well and was particularly happy with the finish of the ultra just less than 9 hours and 26th place out of 86.”

Pancreatic Cancer Action is committed to working towards earlier diagnosis of the disease so that surgery, currently the only cure, is made available to the sufferer.  Pancreatic cancer is the UK’s fifth biggest cancer killer and 26 people die a day from the disease. The 5-year survival rate is just 5%, a figure which has barely changed in over 40 years.

”As a charity, we rely on the generosity of individuals like James to help us continue our vital work. We would like to thank James for taking part in this massive challenge and for his fundraising efforts which mean that we can continue research into early diagnosis and raise awareness of pancreatic cancer.”