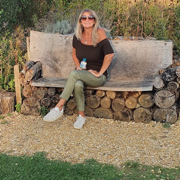 Lizz was diagnosed with pancreatic cancer years after experiencing initial symptoms, including bloating and usual smelling urine. Now thankfully in recovery, she has turned her attention to raising funds and awareness for pancreatic cancer with her '10,000 step challenge'. Lizz tells her story.

I was going to and from the doctors for a long time before I was diagnosed. I just knew something wasn’t right, my stomach was bloated and I had smelly urine but I was just told that it was my age and that things change when you get older.

I was eventually sent for some blood tests that showed there may be something wrong with my enzymes so I had to have regular blood tests to check this. However, after many tests I was told that it must just be how my blood was and that I am fine.

I always questioned the doctors but nothing ever came of it and I was just sent away.

I am not one to normally go to the doctors of get ill so I knew something was wrong with me. Finally, after a lot of going back and forth I was sent for an endoscopy, a CT scans and an MRI scans on various parts of my body but again, was told she was all clear.

Blood kept showing in my urine so I had tests for this but these were all clear too.

However, April this year, in the middle of lockdown, I had a call from my kidney specialist, ironically by accident but it led to me getting a diagnosis.

He had already called to go over my results but asked if I was still getting symptoms, which I was, so called me back in for more scans.

I was diagnosed with neuro–endocrine pancreatic cancer and had to have a splenectomy and distal penectomy in August. I was in hospital for 3 ½ weeks in the ICU high dependency ward and then was allowed home to recover.

I am still recovering now with some high energy and some low energy days but I am not a victim or a sick note, my life is for living and making the most of.

I did a 10,000 steps in September challenge that I raised nearly £1,500 along with my friend who also took part.

This month I am now nominating other people to do 10,000 steps a day to create awareness amongst different groups of people and communities.

I have also got Southampton Guildhall lighting up on the 19th of November which is World Pancreatic Cancer Day and my sister is lighting up her house too.

Throughout this I am so grateful of the support from my family and friends and a big thank you to my friends Alison and John Rogers who have driven down from Northampton to help with the 10,000 steps challenge.