Lesley turns Scotland Purple in memory of her mum

Following the death of her mum Pauline in June, Lesley turned her attention to raising as much funds and awareness for pancreatic cancer as possible. Her dedication throughout Pancreatic Cancer Awareness Month saw her encourage a number of iconic landmarks to light purple and raised thousands of pounds. This is her story: 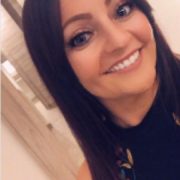 Our supporter Lesley Irving had a vision to turn Scotland purple during this year’s World Pancreatic Cancer Day.

She contacted iconic buildings, bridges and landmarks all over Scotland, and got many of them to light up purple on Thursday 19th November.

Lesley said: “When I felt lost, I thought I was best doing something positive, and I’m determined to keep going. I really hope that through fundraising and raising awareness we can help other people as more needs to be done to create better outcomes for pancreatic cancer patients.”

Lesley has already raised over £5,000, split between Pancreatic Cancer Action Scotland and the Ayrshire Hospice, who took care of Pauline during her final weeks.

Pauline, 72, felt unwell at the start of this year, she had been experiencing back pain. Following a scan, she received a pancreatic cancer diagnosis in late February.

At an oncologist appointment Pauline was told she could have around three months to live. She was offered chemotherapy to extend her life by a possible four months.

Sadly, Pauline’s health deteriorated quickly. When she was due to start chemotherapy, the country was about to enter lockdown to try to stop the spread of the Coronavirus, and Pauline’s treatment was cancelled. Lesley also admits her mum wasn’t well enough to receive treatment.

Pauline sadly passed away on the 6th June.

Lesley said: “With some cancers you might get time but there was no time with mum. In February we were enjoying coffees on a Saturday and within weeks she had been destroyed by pancreatic cancer.”

Covid-19 restrictions meant that Lesley had to say her last goodbye to her mum through a window of Ayrshire Hospice where her mum lived for the last nine weeks of her life.

Lesley said: “The hospice was the best place for mum because we weren’t able to manage her pain. The amount of medication she was on was colossal. I had to write it all down. Caring for mum was becoming difficult for dad and doctors were having to come out on a regular basis.”

Lesley is grateful her dad, David, was able to move into the hospice to stay with his wife during her final weeks. Sadly, the pandemic meant only one other visitor was permitted and a heart-breaking decision had to be made between Lesley and her brother Callum. It was decided that Callum would be the named visitor because Lesley, who lives in Lenzie, outside Glasgow, had driven her mum to the hospice.

Lesley said: “Mum never let dad go from the minute she found out and he was by her side the entire time. The week she was going to die, the hospice pulled her bed up to the window. I’m glad they did, but it was traumatic. I was standing in flowers trying to lean up to a window. I couldn’t reach her to hold her hand.”

David lost his wife of 46 years and his best friend. The couple from Largs, were at school together, with David being two years above Pauline. 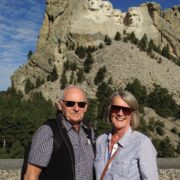 Lesley said: “Mum was such a kind, generous and fit woman, who had very healthy life choices. She was truly a wonderful mum who did not deserve any of this. She loved to travel with my dad by her side and they never did anything without each other. They were best friends.”

The hospice did an amazing job, not only caring for Lesley’s mum, but for her dad too.

Lesley said: “The hospice showed my mum dignity and also cared for my dad throughout the nine weeks he stayed there. The care they gave my dad was also crucial as he watched his best friend and partner since school days fade away.”

Lesley’s determination to raise awareness and to help others has already gained lots of support and her purple light campaign got a lot of interest in Scotland, with newspaper features and radio interviews, getting people talking about pancreatic cancer.

She said: “The enormity of it all has really hit me. Everything crept up so fast. Pancreatic cancer has a whole new meaning to me, and it’s really opened my eyes to fundraising and raising awareness, and I will keep doing all I can to help.”

Murray Easton, Head of Fundraising and Supporter Relations said: “’Lesley’s passion and determination to raise funds and awareness is inspiring. We’re determined to ensure the 2020’s is the decade of change for pancreatic cancer and our supporters will play a huge role in that. Grassroots awareness is so important and Lesley’s energy and efforts to raise awareness about the symptoms might just be the spark that results in an earlier diagnosis, which greatly enhances the chances of survival. We are extremely grateful for Lesley’s support.”