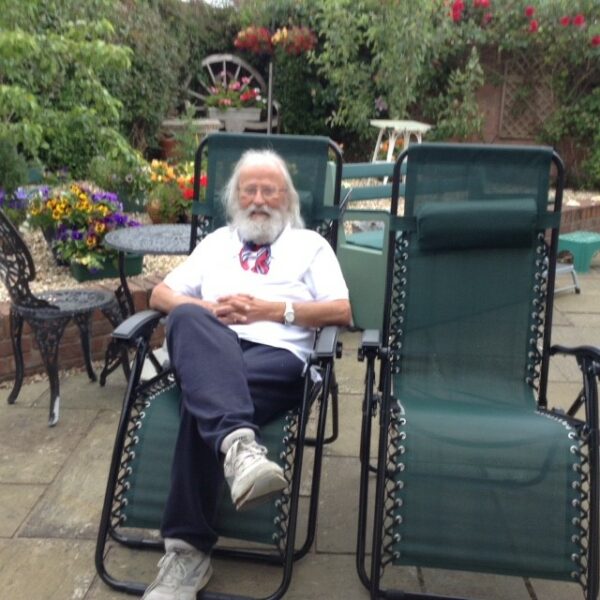 This is Alison, Kingsley’s daughter writing his final blog for PCA.

Sadly at 6.11pm on Thursday 26th November my father died in his own bed in his own home. He was 78 and he died as he wished with my mother, Monica, my brother Paul and myself with him.

Following on from his last post … when he collapsed and my husband had to pick him up, he became increasingly tired and slept much more.

Prior to this he’d lost his sense of taste and was finding eating more of a challenge.  He said nothing tasted right. And as he described, he became increasingly weak needing more help getting to the bathroom.

I asked the hospice nurse how long she thought dad had got and she privately told us ‘around two short weeks’, which in hindsight turned out to be very accurate.

Despite this prognosis, dad continued to be as busy as ever – and during those times it was hard to imagine he would still not live much longer than she thought.

As a news journalist, he continued to watch the news and read the papers. He spent hours tidying his study, painstakingly labelling dozens of brown envelopes of photos, lovingly read letters, our childhood school reports, my teenage essays, my brother’s teenage artwork – carefully preserved momentos of the past he held dear, memories of our lives.

He still emailed me every day from his iPad – his last email to me detailing how pleased he was to see his videoed rendition of Louis Armstrong’s What a Wonderful World on Facebook – arrived on the Monday lunchtime only three days before his death.

But within 24 hours his condition took a serious turn for the worst.  By now he had stopped eating and could only manage sips of orange squash. He was so tired and weak, he could barely open his eyes.

Paul and I both drove to Sidmouth, Devon from London to support mum and be at dad’s bedside.  None of us knew what to expect and I have to confess over the past weeks as his health deteriorated, I felt a pang of anger that he even wanted to die at home!  Caring for a dying person is both physically and emotionally exhausting. And although my mum coped so brilliantly, there was a part of me that wished he wanted to die in a hospice where ‘professionals’ could manage it and spare all of us the gory details.

Now however I feel grateful that dad insisted on dying in his own bed because not only did he have the death he wanted, but caring for him as a family, being with him during those final days was an amazing life-affirming experience.

Over the next two days as dad hovered between life and death, we were all able to tell him (yet again) how much we loved him.  We laughed, talked and cried next to him. In between we watched TV, cooked, went shopping – keeping him informed about our daily lives as usual.

During this time we had the most fantastic support from Sidmouth Hospice Care, East Devon district nurses and carers. I confess I used to think hospice nurses were do-gooding busy bodies. But fortunately dad disagreed and after deciding he could no longer cope with chemo, he sought help from them (even though at that time he did not physically need them and would not need them for months.)

This meant dad got to know them and they knew him. During those final hours they were marvellous unobtrusively popping in regularly to check we were fine, that dad was clean and had excellent pain relief.

Then late afternoon on the Thursday dad took one tiny last breath and he’d slipped away – so peacefully and quietly.

Four hours later mum, my brother and I dressed dad in his favourite clothes and said our final goodbyes as he was carried out of the house.

Once dad knew his pancreatic cancer was terminal, he confronted death head-on. He was not frightened of death and his strength – and the fact he made us confront it too by his wishes to die at home – has proved an uplifting experience for all of us. It has also reaffirmed our closeness as a family.

That said, dad loved life.  His enthusiasm for everything – whether it was seeing his beloved daffodils bloom in the spring, avidly writing for the Sidmouth Herald or enjoying his five grandchildren – was infectious.  He loved driving his motorhome going all over the world with my mum at his side, he adored following my career following in his footsteps as a national newspaper journalist, and he was incredibly proud of my brother’s art and music.

Because of this, he has a left a hole in all of our lives that we will never be able to fill. But this is the circle of life and fortunately we have photos and videos and of course memories of so many special times with this wonderful larger-than life character.

The solace is I see dad’s love of life carried on in my own children and Paul’s children.  This is not the end of dad’s life because in our hearts he will always be with us.