3 years ago today: Kerry Harvey appears on This Morning 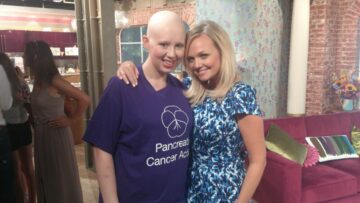 This incredibly young woman put the spotlight on pancreatic cancer and will always remain in the hearts of all of us at PCA and no doubt, many other people who appreciate her incredible  bravery.

The following is a post from July 2013 after her first appearance on the show.

Kerry Harvey and her boyfriend Matthew attended This Morning to talk about Kerry’s devastating diagnosis with pancreatic cancer. Kerry, 23, said: “I had never heard of pancreatic cancer before I was diagnosed with it earlier this year. I got in touch with a number of charities as I wanted my story to be told so that more people were aware of this disease.

“It was a great surprise to get a call from Pancreatic Cancer Action to say that This Morning wanted me on the show,” continues Kerry. “I debated it for, oh, half a second before saying yes. I was honoured to be able to tell my story and raise awareness on a programme that attracts millions of viewers.”

“The whole experience was amazing. I burst into tears when Emma Bunton announced that ITV had decided to send me and Matt off to enjoy a once-in-a-lifetime experience. Not only did we get amazing seats at Wicked but also a fully signed programme, backstage tour and meet-and greet with the cast. We concluded our amazing day at five star M.E. London hotel for the night in a room where the bed was wider than it was long. A day and night I’ll never forget!”

Ali Stunt, Chief Executive at Pancreatic Cancer Action and a pancreatic cancer survivor herself, said: “We are extremely grateful to Kerry for raising awareness of pancreatic cancer on national TV. Despite affecting over 8000 people each year, not much is known about the disease and its symptoms.

“Raising awareness of pancreatic cancer among the general public is one of our focuses as a charity,” continues Ali. “If diagnosed early enough, a patient could receive potentially life-saving surgery. Kerry and her boyfriend thoroughly deserved to be rewarded for their bravery and I hope they had a wonderful time.”