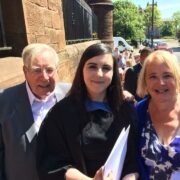 Our first case study for this year's Jog Jan for Pan Can is Katie Hendry. Katie is looking to complete 50km in memory of her Gran, Christine. You can read more on her story below.

My gran was the most kind, loving person you’d ever meet. She’d retired at 51 amid some concerning health problems: high blood pressure and hypothyroidism. In spite of this, she ate well and exercise every day, always being a dog owner and taking them for long walks. She did enjoy a glass of wine regularly but this was her only vice.

She started to lose weight in the first half of 2019: she was attending Weight Watchers and she was losing several pounds a week without trying (we remember her saying: “I’m still losing weight even though I’ve been eating cake for dessert every night!”) The sad thing was that my gran always wanted to lose weight throughout her whole life, and so when the weight loss started, she was delighted and did not immediately recognise it as a cause for concern. She was losing weight for around one year before any other symptoms started.

The next symptoms that came were indigestion and a feeling of bloating after meals. My sister remembers her saying during the first lockdown in 2020 that she was only eating half a meal and feeling full, and how great it was. My sister said to her; “you’re losing weight and not eating full meals, you should get that checked out, it could be something like ovarian cancer.” Sadly, my gran was too blindsided by the fact she was losing weight and feeling good.

Towards the second half of 2020, she started to experience stomach and mid-back pain. She was also experiencing changes in toilet habits. She went to the doctors during the summer, but she was told the pain was likely due to her medication for other ailments, so the doctor would try her on different medication and see if the pain subsided. It was not anything to worry about though, he assured her. The problem with my grandparent’s generation is that they are reluctant to go to the doctor in the first place, and they will take the doctor’s word as gospel. When the doctor said everything was fine, off they went.

The symptoms continued though, and she was back at the doctors. There were delays due to annual leave and my gran didn’t want to see a different doctor, she trusted the doctor she saw and she thought he knew her history. I think one of the issues with detecting cancer is if the individual has other co-morbidities, the doctors are likely to assume the symptoms are due to their other conditions, as it has been these conditions they have focused on for so long. I remember my gran texting me in December 2020 saying: “Doctor did tests for bowel cancer and I came back clear, so I’ve to continue different medication for a few weeks and see if symptoms continue. But so glad it’s not serious.” Heartbreakingly, it was more serious than bowel cancer.

Eventually, by January of 2021, my grandparents were losing faith in the GP. He had organised a telephone consultation for eight weeks later with a gastroenterologist, to take place at the end of February. By this point, my grandparents were worried it could be cancer and thought it could potentially be stomach cancer, so they arranged to access healthcare privately. From here, things picked up and she had an endoscopy, followed by a colonoscopy, then a CT scan, where it was confirmed in March that there was a shadow in the body of the pancreas. A biopsy followed, which confirmed the diagnosis: stage 4 pancreatic cancer with liver metastasis.

Considering she was stage 4, she would no longer be treated at the Glasgow Royal Infirmary and was transferred to the Beatson West of Scotland Cancer Centre. She might be eligible for treatment if they could get her pain under control, and gain back at least some weight to tolerate chemotherapy. However, something shifted within two weeks of diagnosis.

My gran almost entirely lost her grip on reality, being in a delirious, delusional state, having paranoid thoughts and not making much sense in terms of what she was saying. We thought she may be taking too much of the top-up liquid morphine she had been given for breakthrough pain, however, a short stay in the hospital, changes in opioids, and checks for dehydration did not reverse the delirium. We hoped we might be able to reverse it and she would then be in a position to undergo treatment, but this did not happen.

Much of the information we gathered was based on online research. We did not feel like there was much professional knowledge or a strategy to tackle delirium, from the GP, cancer charities and hospitals. I only recognised it as symptoms of delirium based on a module from my undergraduate degree in Psychology.

To this date, we are still unclear whether the delirium was caused by the morphine, was a symptom of advanced cancer, or whether this was a form of dementia triggered by such a shock diagnosis. Whatever it was, completely blocked us from being able to spend meaningful time with her in these last few weeks. She was confused, agitated, and thought the carers who came out twice daily to care for her were living in the house and part of some grand conspiracy against her. It was heartbreaking to watch.

Gradually, as the tumour progressed, she ate less and less, being less able to use the toilet and shower, even with assistance, and lost more and more weight. She sadly passed away on the 25th of June.

We firmly believe that if the doctors had more training and awareness of the symptoms of pancreatic cancer, then she might still be here today. I don’t understand why the doctor did not immediately refer her for a CT scan when she attended the practice with weight loss, stomach and back pain, indigestion and changes in toilet habits. The NICE clinical guidelines state that weight loss with just one of these symptoms merits a CT scan.

There also needs to be more research on the risk factors for pancreatic cancer.

I really hope that the ten years ahead are the Decade of Change that pancreatic cancer needs. My gran was 80 when she passed away, she did have a full life, but I know individuals of all ages are diagnosed with this disease, and no one should be faced with such grim survival rates for a cancer they didn’t know they had. Harrowingly, my gran became part of the statistic where more than half of those diagnosed die within three months (she passed one day short of the three months from diagnosis). Let’s address the issue that needs addressing for this cancer, starting with establishing real risk factors, and researching the causes and treatments for delirium, so we can help more people survive this awful cancer.

Pancreatic Cancer Action is continuously looking into the associated signs, symptoms and risk factors of pancreatic cancer, as well as misdiagnoses of the disease. Find out more by visiting https://pancreaticcanceraction.org/about-pancreatic-cancer/

Katie will be continuing to jog throughout January for our Jog Jan for Pan Can event. As part of this, she has shared her top tip for running: “My top tip for running would be to utilise the Couch to 5K app. I’ve never been a running person but the app is great because it’s broken down into sections based on whether you’re nearer the start or the end of the course, and the sections are always achievable. The first session is always the hardest; I noticed an immediate difference the second time I completed it, and Couch to 5K can be used alongside Strava and your other music! You can donate to Katie’s fundraising page here.