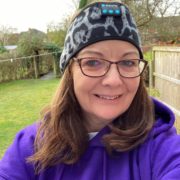 Julia taking on JogJan for PanCan in Memory of Husband Stephen

Julia sadly lost her husband Stephen to pancreatic cancer in 2018. This January, she's taking part in Pancreatic Cancer Action's JogJan for PanCan event, with a target of running 100km and raising much needed funds and awareness for pancreatic cancer.

“It was Christmas 2015 when my partner Steve, was finally diagnosed with pancreatic cancer. After months and months of being fobbed off by his GP he paid for his own scan, which confirmed the diagnosis.

He was just about in time to have a Whipple Op which he had early Jan 2016 at Liverpool Royal.  We were then offered the chance of a clinical trial – to have a vaccine against cancer cells forming – along with chemo. Liverpool Royal and the trial team were amazing.  In February 2018 he was declared cancer free.

In March 2018, his precious BMW i8 all electric car caught fire whilst he was driving it, luckily he escaped but the trauma of this, I believe, bought his cancer back.

It was confirmed terminal in July 2018, he was given 6 months, we married at Portmeirion on 31 July and after palliative care at home and

finally Clatterbridge Hospital, he passed away on 28 December 2018.

Your post about JogJan for PanCan arrived on FB on the 2nd anniversary of his death, and it was just meant to be. GPs need to be aware of this awful disease and that speed of diagnosis is the key to combat it.”