Alba decided to brave the chop and fundraise for PCA in memory of her G-ma B. Her mum Rachel tells her story here:

When people meet Alba one of the things they often say is “what lovely, long hair”.

She’s very quick to point out that she is growing out to donate it. This isn’t her first go; she made her first hair donation age 5 having learnt that people lose their hair often when in cancer treatment. She pointed out that she had lots and she could give it to them. So she did. Almost as soon as that hair was off, she stated that she was growing it again, to donate again.

You can Take Action too!

Click here to help us improve the survival rate by taking on your own challenge for PCA!

So here we are three years later with another load of hair ready.

This year was different though, because in between the two donations, she (we) lost a very special person, G-ma B. Alba, by necessity, was there to witness the rapid decline. It was a shock for everyone. Suddenly Alba (and all of us) were learning about this horrid thing called pancreatic cancer.

G-ma was fortunate to have lots of people in her life who loved her very much, not least the many little people in her life. It’s difficult to explain to children, or adults for that matter, how someone can suddenly become so ill.

Why couldn’t they fix it? Well because it was too late.

Why was it too late? Because they didn’t see it until they could no longer do anything about it.

Like many cancers, pancreatic cancer is determined, harsh, unrelentless, but worst of all, stealthy. There just wasn’t anything to be done. It was already too late at the start.

So when it came time to donate her hair again, Alba was quick to say that she wanted to fundraise for a charity that helped patients with pancreatic cancer. I asked her why, she simply said “because it made G-ma very sick and I don’t want other people to get that sick”. 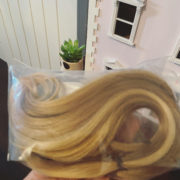 So she went for the chop again. This time in honour of our beautiful, strong G-ma B.

And, although she didn’t raise thousands, I know the £600 she did raise with her little hair chop will be put to good use by PCA to help find a way to diagnose patients earlier and keep many more G-mas’, Grandmas, grandads, mums, dads and all, around with their families for longer.