Kerry Irvine knows all too well what a devastating effect pancreatic cancer can have on people’s lives and how important it is to be aware of the signs and symptoms. 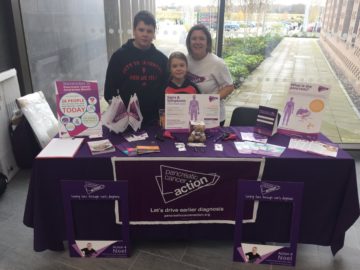 Kerry’s husband, Noel, was diagnosed with pancreatic cancer after receiving treatment for IBS 18 months prior, which is a common misdiagnosis of the disease.

According to statistics from a recent survey, awareness of pancreatic cancer in Northern Ireland is the lowest in the whole of the UK, with only 2% of the population knowing a lot about the disease.

With the lowest survival rate for all 22 common cancers (less than 7%) pancreatic cancer is set to become the UK’s 4th biggest cancer killer. This is largely due to the late diagnosis of the disease.

Increased awareness of the signs and symptoms of the disease is vital for early diagnosis and increased survival rates. This is because there is currently no screening test for pancreatic cancer. It is particularly important in Northern Ireland as a recent survey shows that 62% of people don’t know any of the symptoms of the disease.

To tackle these issues we’re, working in partnership with NIPanC, Northern Ireland Pancreatic Cancer, to launch the first multi-targeted awareness initiative in Northern Ireland in June 2019. Our campaign will raise awareness amongst the general public, pharmacy teams and GPs.

Kerry Irvine‘s experience is all too typical. If Noel had been aware that a change in bowl habit such as pale and smelly stools and weight loss were symptoms of pancreatic cancer he could have been diagnosed earlier. He had also been experiencing other symptoms of the disease such as severe pain in his abdomen and itchy skin. 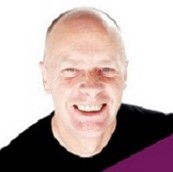 After Noel’s passing, just 6 months from diagnosis, Kerry dedicated herself to making others aware of the disease and set up ‘Action4Noel’ a fund to raise money for PCA in Noel’s memory.

Kerry is now one of the founding members of the Northern Ireland Pancreatic Cancer Group (NIPanC) which has helped to fund PCA’s awareness campaign.

Kerry says, “I hope that the awareness raising that we are undertaking with PCA will contribute directly to a future in Northern Ireland in which more people can survive pancreatic cancer, there are more treatment options available and there is better awareness of pancreatic cancer and its symptoms.”

“I wish I had known that the signs and symptoms Noel was displaying were classic of pancreatic cancer – maybe if we had known he would have had a better chance of survival.”

“Knowing that Noel’s legacy continues to live on makes me very proud. I urge that if you feel you might be experiencing the symptoms then to go to your doctors, mention your fears and download Pancreatic Cancer Action’s symptoms diary.”

Ali Stunt, our Founder and CEO says, “As someone who has had the good fortune to be diagnosed early, we need to make sure other people can have the same outcome.”

“As a small charity we have concentrated our efforts in small regions of the UK as funds have allowed. However, our ambition is to help us get this campaign to all corners of the UK.  Campaigning with NIPanC is important to raising awareness across Northern Ireland”

“By ensuring that more people are aware of the disease, the symptoms and their risk, we can help change the story for pancreatic cancer. It is not ‘the silent killer’, as it has been dubbed, and going to the GP with symptoms early can help more patients to be diagnosed in time for surgery and potentially save their lives.”

Every year there are around 250 deaths from pancreatic cancer in Northern Ireland which could be prevented if awareness of the signs and symptoms was higher.

To find out the signs and symptoms of pancreatic cancer please visit https://pancreaticcanceraction.org/about-pancreatic-cancer/symptoms/