This November is Pancreatic Cancer Awareness Month and throughout the month we will be sharing a series of stories written by survivors of the disease. This is Gill’s story.

“Before I was diagnosed, I hardly knew anything about pancreatic cancer” 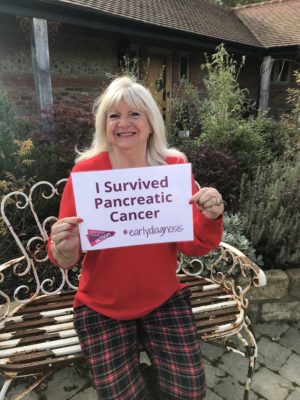 In April 2015, Gill found a lump in her breast which she told her consultant as she had previously had treatment for breast cancer in October 2000.

Gill tells the story in her own words:

My consultant was very thorough, and there was obviously a concern about metastatic breast cancer, so he ran a variety of tests including biopsy and bloods. There was a strange tumour marker result which let to a PET scan.

They found that Gill’s primary cancer was in her breast but it was also in the tail of her pancreas which is when she was referred to a specialist.

As soon as Gill had recovered from her breast surgery, she would have to go into surgery to remove the tail of her pancreas and her spleen.

My breast surgery went well and my surgery for the pancreas and spleen was scheduled for early July.

In the meantime, I underwent a series of vaccinations to protect me from infections in the future as I would no longer have a spleen to cope with infection.

Before this I had no idea what the spleen did! As you can imagine I was quite shell shocked with everything that was happening. I was trying to keep calm, coping with doctor schedules, tests and facing a major challenge.

At no point did I doubt my medical team. They were thorough, clear and reassuring throughout. My breast consultant is a great man who I had known since 2000. He recommended the Professor to undertake treatment for my pancreas.

The operation was successful but it took Gill a while to recover in terms of her energy and fitness. She had to wait until she was fit enough to start chemotherapy.

Everything is good so far and i have regular CT scans and blood tests to check. I was extremely lucky to get such an early diagnosis and very thankful to my medical team.

Gill had limited knowledge of pancreatic cancer prior to her diagnosis.

I just knew that everyone in the news that had the disease died quickly but I had no idea what the symptoms were.

Shortly before my diagnosis I developed Type 2 diabetes. Should this have raised a flag? For sure GPs, and we all, should be more symptom aware as we know that early diagnosis is the key to successful treatment for pancreatic cancer.