Clare Ouddanne shares the experience of her husband, Karim, completing the unbelievable NICE Ironman in June to raise funds for us. 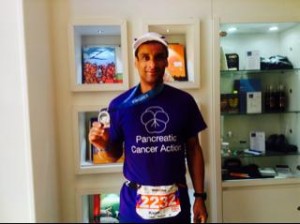 “Got to the airport on Thursday at 5am to find our flight had been cancelled due to the French strike.   We pleaded our cause and were re-booked via Luxemburg and escorted like royalty to make our connecting flight to  Nice.  Sadly our cases weren’t so fortunate and ended up in Frankfurt but with some negotiation we were reunited late the same day!

The race started at 6.30am on Sunday  so Karim was up eating his breakfast at about 3am and we headed off to the start at 5.    The swim was first and to see nearly 3000 people enter the sea  was amazing.    After the 2.4 mile swim he had a 112 mile bike ride up into the mountains on a huge circuit of the local countryside.    He had a bit of a fall at the start of the ride but after a quick once-over by a marshall was allowed to carry on.    We hoped this part of the race would take about 6 hours so took our places by the barriers to wait for him to return – seemed a lifetime but after just over 7 hours he made it back and prepared himself for the Marathon.

Running has always been Karim’s stongest sport and he was amazing – finishing the 26.2 miles in just 4 hours 15 – that’s a time most runners would be proud of without the swim and ride beforehand.

The run was 4 circuits of the sea front in Nice which meant we could see him pass each lap.     The whole race took him 13 hours and 30 minutes.

It’s a huge achievement and he took part with his friends John Scott and Ian Hacon.   John drove down to Nice in a motor home with the 3 bikes and is still on his way home with his wife Michelle.

We’ve chosen to support Pancreatic Cancer Action because my close friend Ruth had a Neuroendocrine tumour in her pancreas and had the Whipple operation almost 4 years ago at Addenbrooks.   It took nearly 2 years for her to be diagnosed and she was fortunate to be able to have this life-saving operation. “