Ali Stunt, chief executive and founder of the charity Pancreatic Cancer Action, is officially among the one per cent of pancreatic cancer patients in the UK who survive more than ten years.

In August 2007, after repeated visits to the GP, Ali, a healthy and active 41-year old, was told that she had pancreatic cancer, a disease that she had never heard of, which, at the time, offered just a three per cent chance of surviving more than five years.  Luckily, for Ali, the tumour was operable which increased her chance of surviving significantly. 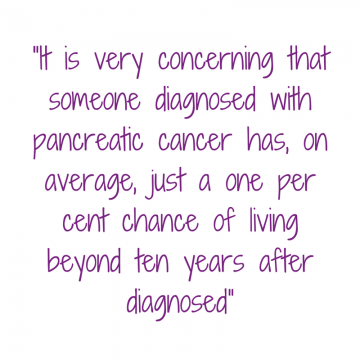 “It is very concerning that someone diagnosed with pancreatic cancer has, on average, just a one per cent chance of living beyond ten years after diagnosed, and so, statistically, I should be dead by now” continues Ali. “Whilst over the last 50 years the five-year survival rate has almost doubled for breast cancer and prostate cancer, pancreatic cancer is still as deadly as it was in the 1970s.”

“This is why I founded Pancreatic Cancer Action, because I want to ensure that more people diagnosed with pancreatic cancer survive the disease, and live long and happy lives with their family and friends.”

More than three-quarters of men and women diagnosed with pancreatic cancer die within a year of diagnosis, and just five out of 100 will survive for more than five years.  This is because pancreatic cancer is often diagnosed at a stage when surgery, which is the only potential for a cure, is not an option.