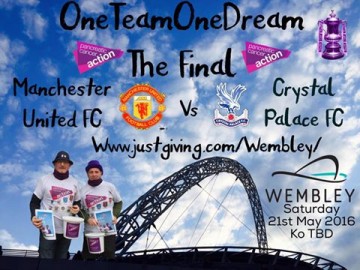 ootball supporters, Liam Molly and Mel Pickup, have been on a mission to raise funds and awareness of the UK’s fifth biggest cancer killer, pancreatic cancer, by following the FA cup competition. Their Road to Wembley – One Team, One Dream for Pancreatic Cancer campaign ends on Saturday 21st May when the pair will be attending their
17th and final match, the FA Cup final 2016 – Crystal Palace vs Man United. At the match, they will be raising awareness and funds for the charity Pancreatic Cancer Action – a charity that exists to save lives by improving early diagnosis.

Liam and Mel have attended every round of the FA cup competition collecting money for the charity and handing out flyers to raise awareness of the disease. They started their campaign on 15th August 2015 after attending the Extra Preliminary Round of the FA Cup at the Cleethorpes Town FC v Brigg Town FC fixture.

Cleethorpes Town were very welcoming and when they won the pair followed them to their next fixture. Liam and Mel have continued to follow each winning team onto their next game.

They have received amazing support along the way from both the pancreatic cancer and the football community. From supporters helping the pair get match tickets to West Ham United FC co-owner, Mr David Sullivan, donating £1,000 to the cause- and thanks to the Lincolnshire Football Association Liam and Mel have tickets to the FA Cup final this Saturday! 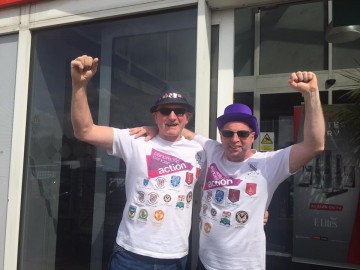 They were motivated to start the campaign – ‘Road to Wembley – One Team, One Dream for Pancreatic Cancer’ – after the loss of great friend, Kevin, who passed away from pancreatic cancer on 22 December 2009 aged 48. Kevin was a huge football fan and also coached young people in football.

Pancreatic cancer survival rates remain shockingly low at just 4% and 24 people die a day from the disease. Pancreatic Cancer Action is committed to working towards earlier diagnosis of the disease so that surgery, currently the only cure, is made available to the sufferer. Ultimately this will lead to improving survival rates.

Ali Stunt, Founder of Pancreatic Cancer Action, said: “We are very grateful to Liam and Mel and all who have supported their campaign, for giving their time to support Pancreatic Cancer Action.
“As a charity, we rely on the generosity of individuals to help us continue our vital work. These funds enable us to continue research into early diagnosis and raise awareness of pancreatic cancer.”

Liam and Mel would love people to get involved with their campaign on social media: