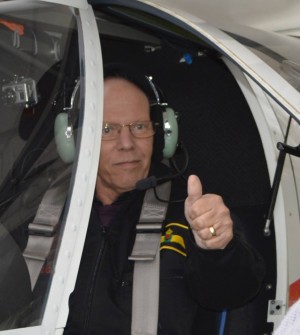 At the beginning of the month, Penny Lown got in touch with us to ask if we could help her colleague Siobhan.  Her grandfather, Victor Young, is sadly dying of pancreatic cancer aged just 69.  He told his family that one of his dying wishes is to fly on a light aircraft.

While this was an unusual request for us, we made a few enquiries and managed to speak to Kevin O’Neill, who is the director of the Fly by Light flight school in Elstree.  We explained that Victor was desperate to fly in a light aircraft and Kevin was very happy to help.

Victor took his flight on Friday 20th February and was absolutely over the moon.  Victor said: “I had such a good day at Elstree air field flying a plane to Hatfield House and back then went on a flight simulator the staff at fly by light are brilliant. I want to thank all the people who made it possible.”

We are extremely grateful to Kevin at Fly by Light for doing this for Victor.  It is such an incredibly kind and generous thing to do. Thank you!