Last week, we had a day of radio and TV interviews to celebrate the fact that our CEO and founder, Ali Stunt, had become one of the one per cent who survive pancreatic cancer for more than ten years. While this is an incredible milestone to reach, it is also a sad reminder of why our charity exists – survival rates for pancreatic cancer are shockingly low!  Here Ali shares, in her own words, her thoughts about being a ten-year survivor of pancreatic cancer. 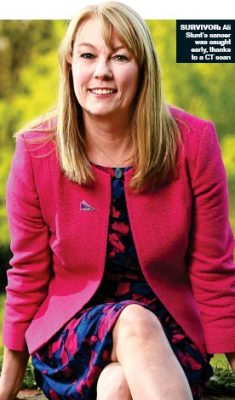 Since August 2007, I have been diagnosed and treated for pancreatic cancer, founded the charity Pancreatic Cancer Action, seen both my boys finish school with excellent results, seen one of my boys graduate from university and law school and embark on a new career as a lawyer in the City of London and the other complete a successful first year at university.

I was delighted when my niece Caitlin was born but saddened by the loss of her sister Imogen at birth five years ago. I went to Australia to see my cousin Stephen get married and have been thrilled by the arrival of four more second cousins.

I have watched our retriever puppy, Megan grow up into a lovely, friendly and fun adult dog but sadly we lost her sister, 13-year-old Sascha a couple of years ago.

I was lucky to still be able to visit my 97-year-old grandma until her passing earlier this year. And most of all I will have been lucky to be celebrating 25 years of marriage to Phil in September.

I have also been on several lovely family holidays and have enjoyed meals out and parties with friends.

However, if I was not one of the one percent to survive pancreatic cancer, I would not have experienced any of this.

Statistically though, I should be dead by now. A sobering thought. But I know that I am very lucky indeed.

While initially I asked myself and those around me “why me?” when I was diagnosed, it is difficult not to ask the same question about why it is me, and not other, very deserving people, who is surviving pancreatic cancer. I have got to know many of these people over the years and it still saddens me to think they are no longer with us.

I can’t dwell on that too much, but I do know that it was my early diagnosis, in time for surgery then followed by chemotherapy and chemo radiotherapy that gave me the opportunity to survive. Sadly, it is still the case 10 years later that only 10% of patients are diagnosed in time for surgery to be an option – currently the only potential we have for a cure.

A lot has happened in the world in 10 years, but not a great deal for pancreatic cancer outcomes. We are though, beginning to see greater levels of public awareness of the disease thanks in main to the high impact campaigns Pancreatic Cancer Action has run, and we are starting to see a slight shift in five-year survival – however only by one or two per cent. There is also a glimmer of hope that the major research funders are wakening up to the fact that pancreatic cancer remains chronically underfunded.

However, there is a lot more we need to do and I am determined that over the next 5-10 years we get five-year survival rates to at least double digits if not better. I will continue to campaign and promote earlier diagnosis of pancreatic cancer through my charity Pancreatic Cancer Action. Through my work on the Board of Pancreatic Cancer Europe and the Steering Group of the World Pancreatic Cancer Coalition I am helping spread these vital messages beyond the shores of the UK.

I have been humbled and amazed by the support the UK public has for Pancreatic Cancer Action, and I am grateful to every single one of them, especially those who had the faith to support from the very beginning when I was operating a tiny charity from the back bedroom of my home.

I have to also mention my dedicated team who don’t just turn up to work, but are as passionate as I am about trying to improve survival for pancreatic cancer patients through increased early diagnosis. Their commitment to the cause is unquestionable.

So, while I didn’t want this disease in the first place, I will be celebrating the 10-year milestone with family and friends. I am grateful to still be here and in good health – here’s to another 10!