Phil Smith, from Billingshurst, has helped organise a music  and beer festival at the George and Dragon on Saturday the 19th and Sunday 20th August to raise vital awareness and funds for Pancreatic Cancer Action.

Site Engineer, Phil and his family, are on a mission to raise awareness of pancreatic cancer as his brother Anthony is currently fighting the disease. 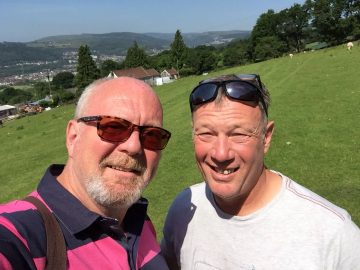 Anthony’s diagnosis came as a great shock to all of his family as he had no warning signs, symptoms or feelings of being unwell until he experienced some signs of Jaundice after a family holiday to Spain.

However, scans revealed that he had stage 4 pancreatic cancer which had spread to his lungs and lymph nodes.

With Anthony and his family having to deal with the initial shock and bleak prognosis, they have since been determined to focus their attention on raising money and awareness through his chosen charity – Pancreatic Cancer Action.

Anthony has already raised an incredible £8,000 through various events including 10,000 steps a day for a month, a charity golf day, and Turkish Dinner evening. Family, friends, work colleagues and local businesses have also contributed through other charity events.

Phil says, “Throughout the eleven weeks since diagnosis Anthony has maintained a determination to live life to the full for as long as possible.”

“He has travelled to many of his favourite holiday destinations enjoying time with his family and close friends.”

“However, his main goal was to be present at his son Jack and daughter in law to be Katherine’s wedding day at the end of July. A goal achieved with a fantastic day of celebration, music, love and laughter.”

“The main theme of the wedding day being live music performed by the two families, mainly the bride and groom.”

Jack and his wife Katherine, along with Phil with other acts will be performing at the event from 5.30 pm on Saturday 19th August with all proceeds from the event being donated to Pancreatic Cancer Action.