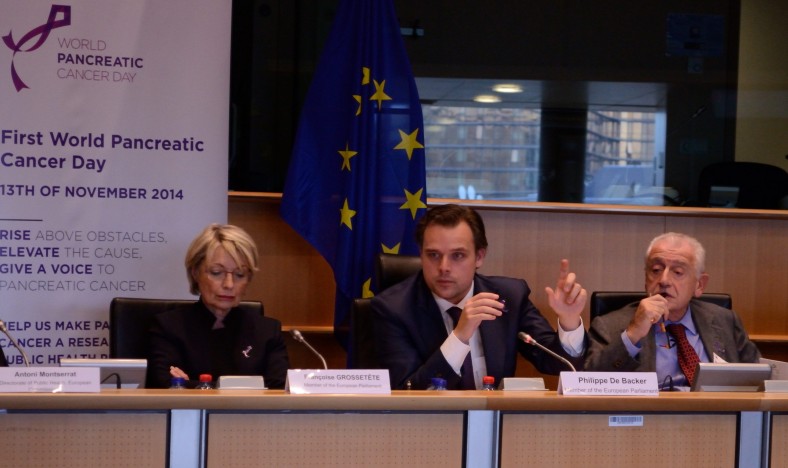 “If we put our minds and resources together we will be able to improve things for all those suffering with this disease. The EU has a prominent role to play”. Françoise Grossetête, MEP

Yesterday I attended the very first Multi-Stakeholder Pancreatic Cancer European Platform meeting at the European Parliament in Brussels. I joined other pancreatic cancer stakeholders: namely MEPs, representatives from patient groups (like me), specialist clinicians and researchers in the field of pancreatic cancer and I was delighted to be the spokesperson for UK pancreatic cancer patients and their families.

What was clear was the agreement among delegates and MEPs alike that pancreatic cancer patients across Europe have been neglected and the disease underfunded for decades. What we did see however, was a clear motivation for change.
This meeting has been supported by The European Cancer Patient Coalition (of which Pancreatic Cancer Action has become a member) and four key MEP pancreatic cancer champions:  Phillipe de Backer, Françoise Grossetête, Phillipe Juvin and Daciana Sârbu and without their commitment it is unlikely that this important meeting would have got off the ground.

We discussed issues around 3 key areas:
Improving awareness of the disease and the issues surrounding it, to both the public and medical community. 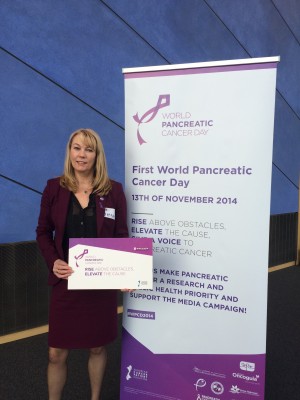 Pancreatic Cancer Registry – a call was made for the inclusion of pancreatic cancer data in the European Network of Cancer Registries (ECRN ). It is so important that the data on pancreatic cancer across europe is collected in the same manner and reported on in the same way – this way we can easily compare countries – finding the best performers and learning from their best practice – adopting policies and patient care across the EU – so narrowing the inequalities that exist currently.

Early diagnosis is the third area – lots of discussion aroud this area and it will be good to sharePancreatic Cancer Action’s medical education initiatives such as our e-learning module for GPs and hospital doctors with our European colleagues.

It was decided to develop work groups for all three priority areas and I will be sitting on both the awareness group and the early diagnosis group as these are key focus areas for Pancreatic Cancer Action and where our experience can best be used to develop EU-wide initiatives.

Research funding was also brought up and this thread will be woven throughout all three workgroups.

The key areas of the Call to Action include:

Professor Löhr stated that “Pancreatic cancer is a medical emergency” and that more should be done to improve early diagnosis including increasing translational research into finding a diagnostic biomarker.

“We can feel a sense of urgency and consensus that we can urgently address pancreatic cancer through the European Parliament and also in the member states.  Pancreatic cancer as public policy priority is getting more support. This is a start of a process not the end.”

I will keep you informed of further progress but this is an exciting initiative as we were told that EU council recommendation is usually heavily implemented across member states. This means we can make a difference for patents not only in wider Europe but recommendations in the EU could help change policy here in the UK too.