English patients miss out as NICE Decides NOT to fund Abraxane® 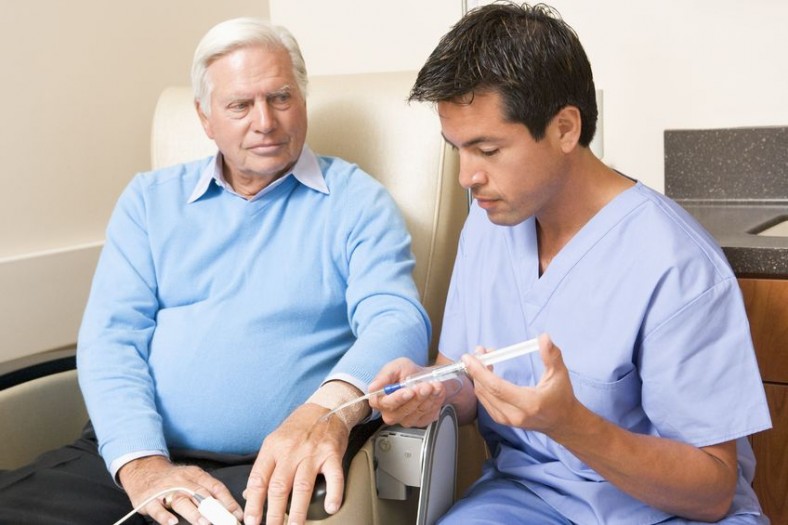 Today, 30th December 2014, the National Institute for Health and Care Excellence (NICE) which makes recommendations on which medicines should be funded by the NHS in England, published its Final Appraisal Determination (FAD) on the use of nab paclitaxel (brand name Abraxane® ) with gemcitabine for metastatic (advanced) pancreatic cancer.

NICE has recommended that Abraxane® should NOT be funded by the NHS in England – on grounds that it is not cost effective.

This, in our opinion, is a backward step by NICE and represents a serious setback for patients and clinicians in England.

The full NICE appraisal and FAD documents can be found here: http://www.nice.org.uk/guidance/indevelopment/gid-tag453/documents

Abraxane® (also known as nab-paclitaxel) has been used in combination with gemcitabine within clinical trials and a recent phase III randomised trial showed that nab-pactlitaxel plus gemcitabine was superior to gemcitabine alone.

In December 2013, the European Medicines Agency (EMA) granted a licence for nab-paclitaxel, in combination with gemcitabine, for the first-line treatment of adult patients with metastatic pancreatic cancer.

Currently Abraxane® has been approved for routine use in eligible metastatic pancreatic cancer in the following countries:

Earlier this year, the All Wales Medicines Strategy Group approved Abraxane® plus gemcitabine for NHS patients in Wales.

Nab-paclitaxel in combination with gemcitabine has not been recommended by NICE for adults with previously untreated metastatic adenocarcinoma of the pancreas and has not been considered a cost effective use of NHS resources compared with treatments such as FOLFIRINOX and gemcitabine plus capecitabine (Gem Cap) for metastatic pancreatic cancer.

We are also concerned that Abraxane® will be dropped from the Cancer Drugs Fund (the only way patients can access it via the NHS in England) as it is one of a group of medicines currently under review by the Fund. A decision will be made in early January.

While the economic modelling criteria NICE uses found that Abraxane® does not prove to be cost-effective, we believe that pancreatic cancer, with its low 3% five-year survival which has not improved in over 40 years, the fact that it is the UK’s fifth biggest cancer killer and that there are very few treatment options available to patients, should be considered as a special case. There is clear unmet need for this disease and NHS funders need to take this fully into account. Abraxane® isn’t that expensive either – according to the manufacturer (Celgene) in their submission to NICE, the cost of average use (3.4 months) per patient is £5,035.

Pancreatic Cancer Action, along with Pancreatic Cancer UK, submitted evidence to NICE to support approval for Abraxane for advanced pancreatic cancer. We challenged the fact that NICE was comparing Abraxane plus gemcitabine against FOLFIRINOX and Gemcitabine plus capecitabine (Gem Cap) as neither of these regimens is approved by NICE. Currently, gemcitabine alone is the only chemotherapy treatment for metastatic pancreatic cancer approved by NICE.

In clinical trials, Abraxane® plus gemcitabine has shown to improve survival by an average of 2 months when compared to gemcitabine alone. This, on the face of it, doesn’t seem a huge improvement, but when the average life expectancy is a mere four to six months, two months more makes a difference to patients and their families. What is interesting from the trial data is that a few patients respond even better with some living up to two years. This accounts for just a handful of patients, but further research we hope will better understand why this treatment is more effective in some patients so therapies can be targeted.

We have also been told by patients and some oncologists that the use of Abraxane® plus gemcitabine offers a truly palliative effect by reducing some of the symptoms of the disease itself such as pain and weight loss. 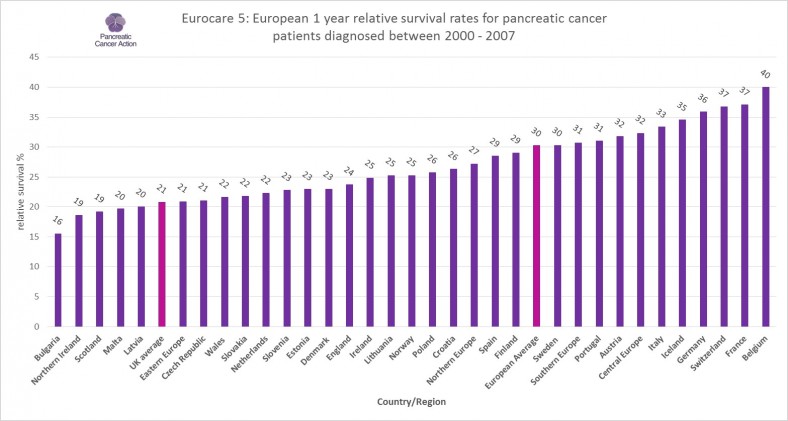 There has been little or no improvement in pancreatic cancer survival for the past 40 years and to prevent access on the NHS in England to a life-extending drug when there are very limited options for pancreatic cancer patients is outrageous and cruel. With Wales being the only country in the UK to allow patients to be treated with Abraxane® plus gemcitabine on the NHS,  patients in other parts of the UK are being put at a disadvantage which is unfair. And, as the UK has some of the lowest pancreatic cancer survival rates in Europe (click on graph to expand), this decision will mean that we will continue to lag behind countries such as Belgium, France and Germany and remain the poor man of Europe in terms of cancer survival.

We urge NICE to reconsider their decision and for Abraxane® not to be axed from the Cancer Drugs Fund.