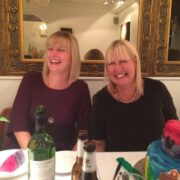 “It has rocked our family to the very core”

Emma Light tells us more about her mum, Barbara, who was the life and soul of the party!

Barbara, my mum, was always fit and healthy. She was the life and soul of every party, enjoyed socialising and dining out with her friends and family. She started out by trying to lose some weight a few years prior and was happy to finally see some of the pounds dropping off. She quickly began to “go off” food and told us all her appetite had shrunk. She was getting lots of compliments on her weight loss and when she started going down a few dress sizes, she was very happy with her appearance. Little did we know the problems had already set in at this point.

We encouraged her to see the doctors and they prescribed her omeprazole. It did very little for her symptoms, so she decided herself to stop taking them and used paracetamol to relieve the pain. By May, she didn’t want to go too far from a toilet.

She had started getting diarrhoea and complaining of doing “floaty poos” that didn’t flush. She also joked about having a radioactive wee. We went away on what would be our last holiday to Norfolk at the beginning of the month. Mum was not right but she soldiered on through and didn’t want to make a fuss. No sooner had we got back when my sister realised mum looked slightly jaundiced.

She’d looked up symptoms on the internet and was concerned about mum’s welfare. I’ll always remember she took her round some flowers and was crying thinking the worst. I thought she was overreacting but we all urged mum to go back to the doctors.

They took her blood pressure and her sugars were sky-high. They suspected diabetes at this point and we all thought it didn’t sound quite right? She went back again to do some blood tests and the GP said he could feel some lumps in mum’s liver. She was sent straight down to A&E for a gruelling nine-hour wait to be seen by the doctors.

She stayed in for two weeks. A stent was fitted to relieve the jaundice. Then we received the worst call of our lives. Mum had stage four pancreatic cancer, that spread to her spine, bile ducts and liver. The diagnosis was two to six months. Eighteen months if she was lucky?

We were given some hope after this initial news. The scans showed a 4cm mass on the pancreas and the other ‘lumps’ elsewhere were cysts. Suddenly, the diagnosis wasn’t quite as bad as we first thought. They would give her chemotherapy with the view of shrinking the mass and hope to operate if mum responded well to the treatment. We all remained positive, thinking mum would be able to beat this.

Sadly, it wasn’t meant to be. Mum only made two cycles of chemo. She didn’t respond well to the treatment. There were problems after problems. She got sepsis and her stent failed, she was in and out of hospital for five months leading up to her death.

She was able to come home for the last two weeks but even then I don’t think we realised we’d have so little time with her. It was a relatively quick death, however. She went out fighting.

It certainly wasn’t a peaceful ending. She leaves behind her husband, two daughters and six grandchildren. The two youngest will sadly not remember their grandma as they are both only a year old. It has rocked our family to the very core.

We made it through our first difficult Christmas without mum. It has been almost six months since her passing and has left a massive irreplaceable hole in our hearts and our lives. We are still in shock from the sheer acceleration of the disease. It is heartbreaking to think this time last year we were not even aware of what was upon us.

I hope our story can make people more aware of the symptoms, even if we can prevent just one other family from going through the same grief and heartache. I have greatly appreciated all of the support we have received from Pancreatic Cancer Action – it is a fantastic charity and I hope to get more involved with their events in the future. We lit up our house in purple on World Pancreatic Cancer Day in November last year to raise awareness – a day before my dear mum’s funeral. I hope she is looking down on us: Purple was her favourite colour