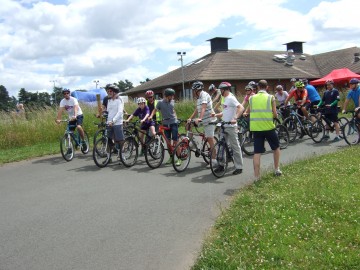 A cycling event held at Stourport for the first time has exceeded all expectations by raising more than £7,000 for the fight against pancreatic cancer.

More than 200 people attended Stourport Easy Rider which was held on Saturday (June 27) at the town’s sports club at Kingsway. Riders were sponsored to complete laps of a purpose-built cycling track of just under a mile with the money raised going to Pancreatic Cancer Action to raise awareness of the disease.

The event was organised by retired Wyre Forest District Police Inspector Paul Crowley, who has pancreatic cancer, and his friend Paul Knight who lost his mother to the disease.

Paul Crowley said: “Pancreatic cancer, which is often described as a silent killer, is the fifth most common cancer and yet many people don’t know anything about it. Survival rates are low, yet if it can be caught early enough it significantly increases chances of making a recovery.

“The event gave people a chance to cycle off-road in a safe environment and we organised it to raise awareness of the disease generally. The money raised will also be used to help educate people in the medical profession about the importance of early diagnosis, which is essential.”

He was grateful to the sports club for supporting the event and thanked all those who attended as well as the many local businesses and people who provided sponsorship and raffle prizes.

Paul added: “The weather was fantastic and the reaction overwhelming. We had set ourselves a target of raising around £2,500 from the event but we managed that on the day itself. However with Just Giving donations made online the total has topped £7,000, which has more than surpassed our expectations.”

For anyone who would like to boost that figure still further there is still time to donate online via justgiving.com/stourporteasyrider.