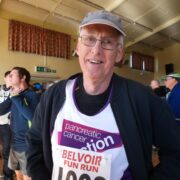 Dr Cliff Pettifor provides us with an update on his health.

I was, and still am, lucky. I was fit and never had a day of serious illness in my life, until 2009, after four months of an ache in my diaphragm and loss of appetite. I belatedly saw my GP.

After a few weeks of tests, including scans, blood tests, and an endoscopy, I was told I had pancreatic cancer (PanCan). The most fortunate part was that despite stupidly putting off seeing my GP, I was still suitable for the Whipples operation, which I had in July 2009.

Everything went well. It was an unpleasant but surprising pain-free experience and I recovered slowly but surely, running again in eight weeks, and back at work soon after that. My motto was to do as much as I could, as soon as I could, and for as long as I could. It seemed to work.

Now almost 80, I am healthy and happy, doing all the things I did before, appreciating and enjoying them more than ever, even including running as the picture shows. There are minor digestive inconveniences, but nothing to grumble about. I am forever grateful to my family, my surgeon and other medics, and to Pancreatic Cancer Action whom I willingly support.