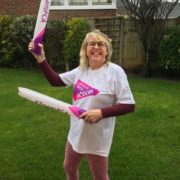 Denise Horton took on JogJan for PanCan in memory of her husband Andy, who she sadly lost to pancreatic cancer. She took on the challenge with the ambition of raising as much awareness and funds as possible and has now walked a brilliant 104km! Denise shares the heart-breaking story of losing Andy and what led her to take part in JogJan for PanCan.

“I wanted to take part in this challenge – JogJan for PanCan to support your worthy cause of raising awareness of the public and of Doctors and medical professionals to the signs and symptoms of Pancreatic Cancer and to raise as much as I could to help you do this. We need to spot the signs and symptoms earlier, give appropriate treatment and save more lives from this terrible cancer.

My husband Andy was very ill for many months, losing weight, not sleeping, in terrible pain in his back and stomach and went to the Doctors on many occasions often seeing a different doctor each time – all of them missing the signs there was something terribly amiss. Even when he had thrombosis in his leg and was being treated for that, they missed everything else he was suffering with.  I stood and cried in the Doctors surgery and demanded to see our Doctor, who still would not send him for a scan.  Only when a locum Doctor spotted his super high Liver Function Test did we get a reaction, only to find all Consultants were busy at a conference. Andy was eventually called for a CT Scan and was left lying on the scanner for nearly an hour as the staff were called to an emergency.  He was so sick when we got home, he agreed to me calling an ambulance and the A&E Doctor knew straight away that he was really ill and gave him morphine.  He went into hospital on the 5th June, diagnosed by the 12th June with terminal PC and came home.  He passed away on the 26th June in my arms.

His Mum, Cynthia was diagnosed with pancreatic cancer a year later and the opposite of Andy – her treatment and illness was long suffering and she was very ill for a year before passing away on my Daughter Grace’s Birthday 16th December 2011. Cynthia’s Mother also passed away with pancreatic cancer.

JogJan for PanCan has allowed me to relive my memories of my lovely husband, taken too soon when Grace was 8 yrs old making me a young widow and of his Mum Cynth who was a super Nanny to Grace.  Taking part in the challenge has inspired me to want to do MORE for PCA, to use  my skills were they can be of benefit to the cause, to be purposeful and to make a difference now and in the future.

I have used the challenge to push myself physically and to use the time to reflect and remember loved ones and to Pray for my family and friends – I did giggle last week when a guy in the allotments heard me praying and talking to myself as I marched past!  He must have thought me a strange one!  I have also made it my mission to speak to everyone I saw on my walks and make a comment about the weather or anything – and to SMILE – you never know who’s day you will brighten up.”