Jack Grimshaw, 24, from Felixstowe cut his flowing locks for not one, but two good causes. Jack is raising funds for Pancreatic Cancer Action and on the 16th February donated his hair to the Little Princess Trust, who make wigs for children with cancer. 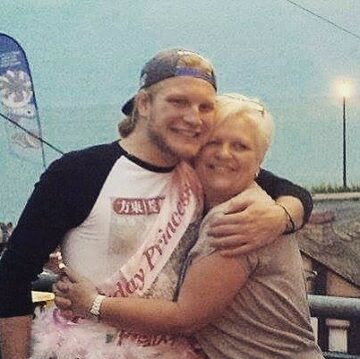 Jack tragically lost his mum, Juliet, to pancreatic cancer in October 2015. Sadly, Juliet was not diagnosed in time for surgery, currently the only cure. Jack is raising funds in the hope that others do not have to go through what his mum did.

Jack’s mum first went to hospital after she had been having pains in her abdomen, which was then treated as case of suspected gallstones. With the treatment for the gallstones unsuccessful, she went back to have a biopsy which is when doctors found the cancer. Jack’s mum sadly passed away six weeks later.

Jack says, “I am raising funds because I lost my mum to pancreatic cancer, we had the misfortune of her being diagnosed too late, so I want to do my bit to raise awareness and hope that the money I raise will help find methods of diagnosing it sooner.”

“No child should have to suffer such a terrible thing, so if my hair can give a little girl hers again after losing theirs, it’s a no brainer.”

Jack’s message to others is that cancer can happen to anyone, so we should all be aware of the symptoms and if you think anything is wrong to go and see your GP

“My mum was never a smoker or a very big drinker, cancer can happen to anyone. Even if it’s a persistent stomach pain that doesn’t feel quite right or a cough that’s been going on for too long tell your doctor. The earlier it can be diagnosed and treated, the better.”

To find out more about the symptoms of pancreatic cancer please click this link.

Pancreatic Cancer Action is committed to working towards earlier diagnosis of the disease so that surgery is made available to the sufferer. The charity fund research into early diagnosis, provide medical education programmes, and launch awareness campaigns.

To support Jack, you can donate to his JustGiving page here.