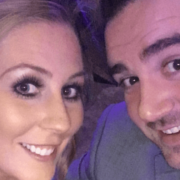 “I’d be teaching in class and scratching. Even giving myself bruises because I was scratching so much”

Schoolteacher Debra is sharing her story during November’s Pancreatic Cancer Awareness Month as she wants to raise awareness and to see more survivors of pancreatic cancer.

Debra Grindall spent her 32nd birthday in hospital receiving treatment for pancreatic cancer. One year later – her boyfriend, Niall MacCuaig surprised her with an engagement ring.

Debra who lives in Kirkintilloch said: “I went from being in the hospital on my birthday and having a CT scan to getting a proposal.”

The couple were due to marry at Boclair House in Bearsden, Glasgow last December, however, due to Covid-19, they have rescheduled their big day to December 2022.

Looking forward to the future and getting married is a world away from when Debra first started to feel unwell in November 2018. It all started with an itch that wouldn’t go away.

Debra said: “I couldn’t be distracted from it. I’d be teaching in class and scratching. Even giving myself bruises because I was scratching so much.”

At first, Debra thought it was an allergic reaction to detergent but then she noticed the whites of her eyes looked slightly yellow. She mentioned this to Niall, and he agreed.

She had also experienced fatigue and had noticed her urine was darker than normal, which she put down to not drinking enough water.

With Niall’s persuasion, she phoned the doctor, and as it was bonfire night, they went out to watch fireworks.

At school the next day, Debra’s colleagues were concerned as her skin was starting to go yellow. They persuaded her to seek an earlier doctor appointment.

Debra said: “It looked like I had a nice healthy tan. I had a glow about me but in hindsight, I was really sick. We were joking at work that I was starting to look like a character from The Simpsons.”

She saw her doctor after work and got some blood tests. Then her doctor phoned, concerned about her Bilirubin levels, he wanted her to go to hospital and told her to pack a bag.

Debra said: “It was the 7th of November and I was in the hospital for ages. I had ultrasounds, a CT scan and an MRI. A blockage to the bile duct was causing problems with my Bilirubin levels and causing jaundice. They thought it was an auto-immune problem and at one point I went home with steroids.”

The steroids didn’t help, and Debra returned to the hospital. She was there over her birthday, the 4th December.

Debra said: “They still weren’t sure what was going on and at that point, they mentioned cancer and said it could be cancerous, but it might not be.”

She met with Mr Nigel Jamieson, a consultant surgeon at Glasgow Royal Infirmary, who explained the Whipple operation and Debra underwent the procedure on the 11th December. Afterwards, Mr Jamieson went over her pathology results and explained that they had removed a tumour that was found at the head of the pancreas.

Debra said: “My mum and dad were with me and it was devastating. It was a massive shock. I don’t smoke, don’t drink that much and I wasn’t overweight. I didn’t tick any of the boxes.

“But I didn’t quite feel right and to this day I don’t know what I mean by that, but I definitely didn’t feel right. I just couldn’t pinpoint it and I can’t really explain it.”

“I already knew a bit about pancreatic cancer and the awful statistics. My grandpa passed away 11 years ago, after having pancreatic cancer. He was in his 80s. I never thought this would happen to me at age 32.”

In a tragic coincidence Debra’s best friend and bridesmaid, Alison, lost her husband Craig to pancreatic cancer. He was in his 30s and was diagnosed a month before Debra became ill. Debra and Craig both ended up going through treatment at the same time. Craig sadly passed away in November 2020.

When Debra received her diagnosis, it was a massive shock, and although Dr Jamieson provided some reassurance, it quickly became apparent how crucial it is to get an early diagnosis for pancreatic cancer.

Debra said: “Mr Jamieson told me the percentage of people that get as far as seeing him is slim. If people don’t get diagnosed early enough and if the tumour is too advanced, there’s only so much he can do. The fact that I was there and able to have the Whipple operation was a positive.”

She also credits Mr Jamieson for going above and beyond. Debra said: “He would come into hospital on weekends and phone during the night to check on me. Niall and I are in awe of him.”

After her operation Debra received six months of chemotherapy at the Beatson in Glasgow and she returned to work a month after her treatment finished.

She said: “When I started back at work, I couldn’t write properly because the chemo left me with nerve damage in my hands and feet, but I was so determined to get back to work and be normal again.”

“My fingers are fine now but my feet still feel quite numb, and I can be a little bit off balance.”

“I feel good, but I get frustrated with myself sometimes because I want to be fitter and stronger, but I remind myself that I have been through a massive operation.”

Debra’s determination saw her complete a jogging challenge this year. Her friend Lesley, who is also Alison’s sister, joined her. In memory of Craig, they completed 210km and raised £1,090 for our charity.

Debra is now looking forward to getting married to Niall, who waited for the right time to surprise Debra and put a lot of thought into his proposal. First of all, he drove to Aberdeen, where Debra’s parents live, to ask for her hand in marriage. He was working as a dispatcher at Glasgow Airport and had just finished a shift in the early hours of the morning.

After work Debra arrived home to find balloons, photos and all her birthday cards and presents. They had birthday cake and tea, and Niall gave her a letter, where he described how amazing she was and how proud he felt. At the end of the letter – there was a PS – I have one more present.

Debra said: “He went over to the Christmas tree. I know it was the 4th December but I’m an end of November girl when it comes to Christmas. I thought he’d got me a bauble for the tree. He brought out a box and went down on one knee. I was bawling my eyes out.”

They spent the rest of the evening telling everyone their news and forgot about dinner. It was also a school night. The next day, Debra’s primary 6 and 7s at Ravenswood Primary School, Cumbernauld, were delighted, especially the girls.

She said: “It sounds really romantic, and it was, but it’s not unlike him because he does lovely things like that.”

And although Debra has had to wait longer than expected to have her dream winter wedding, when it does happen, it will be an emotional day with lots to celebrate.