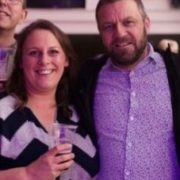 Paula tells us about how her husband, David, and his pancreatic cancer journey. Find out more below.

My husband, David, had been going to the GP periodically for around 13 months prior to his diagnosis. His symptoms were bloating, indigestion, food intolerances, abdominal pain, especially at night, and mild back pain.

Over a 13 month period, his GP sent him for an Ultrasound scan, endoscopy and colonoscopy, and tried him on many different gastro meds. After another set out routine bloods, changes in his liver enzymes were found and he was sent for another ultrasound scan.

This is when our lives changed forever. The scan showed lesions on his liver, so a CT scan was booked. My 49-year-old husband was diagnosed with primary pancreatic cancer with liver metastases on the 18th September 2021.

David agreed to take part in the Precision Panc trial. If any good could come out of this, it would be that he could help others in the future.

After diagnosis, David’s weight dropped significantly, and he lost his appetite, almost completely. David was fortunate enough to be prescribed Creon, which has helped absorb much-needed nutrients and has enabled him to maintain his weight.

It has been a long journey to get to the stage where David has just finished his second round of palliative chemotherapy. Prior to treatment, there were several setbacks: One evening, David suddenly became very breathless and grey in colour. We went straight to our local A&E department, where they thought he had sepsis. But following further investigation, it was discovered David had multiple blood clots on his lungs. He is now on long-term blood thinners, and thankfully, there has been no more complications of this nature.

Sickness and nausea were both major factors in the delay of treatment as David was not strong enough to proceed. This was overcome by two weeks of anti-sickness medication given through a syringe driver. This helped reduce the sickness, but his appetite was still not great, and as a result, his treatment was delayed again. To try and increase his appetite he was started on a five-day course of steroids. This was a turning point, as it was very effective, and David began to eat. Finally, after nine long weeks, on the 25th November 2021, David started treatment.

Being a family who have never experienced anything like this before, we had no idea what to expect through this journey. When people say “it’s been a rollercoaster”, we thought we understood what this meant, but after having been on our own rollercoaster of emotions, it is only now do we truly understand what this means. We try not to have too many expectations, and we live day-to-day, because, as we have come to realise, things can change so rapidly.

For now, David appears to have responded well to treatment. We are pleased to see David enjoying some of the things he loves and we are continuing to make precious memories with our three children and family.

We remain optimistic as we await David’s next scan in a couple of weeks’ time. We know that David will continue to fight hard, and together, we will deal with what the future holds.