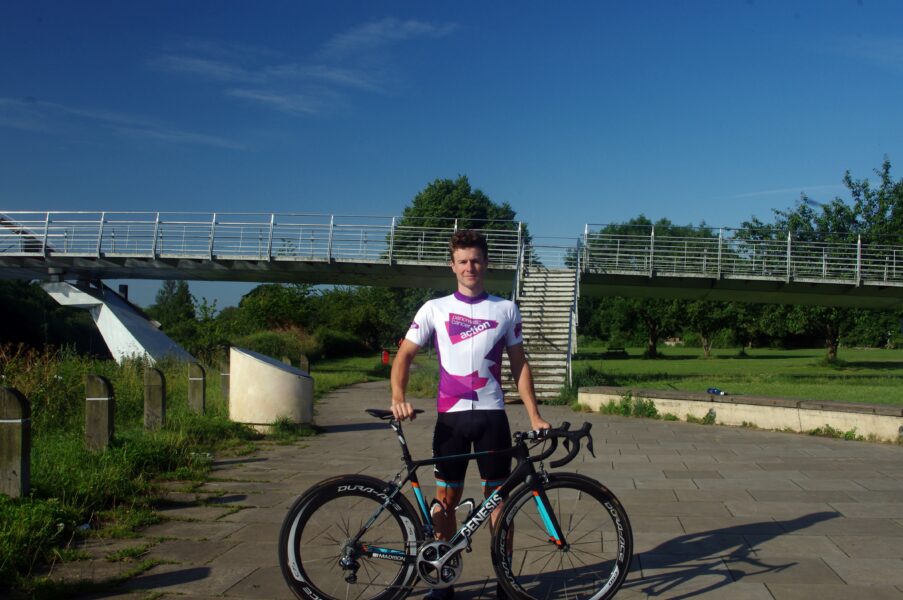 Pancreatic Cancer Action, a national charity dedicated to improve survival rates of pancreatic cancer and ultimately save lives, is delighted to announce today a new Ambassador of the charity, Matt Cronshaw.

Lancaster-born Matt Cronshaw is a professional cyclist who is part of the Madison-Genesis cycling team after a strong 2014 season, and he’s described as “one of the most consistent riders throughout the year.”

Matt said: “I am very pleased to become an ambassador of Pancreatic Cancer Action. The charity is determined to improve survival rates by focussing on early diagnosis.

“Sadly I have been personally affected by this disease after my father, Mike, passed away in April 2014, only 3 weeks after his diagnosis,” continues Matt.  “Before he was diagnosed, I had never heard of the disease before and now as an Ambassador, I want to bring more awareness to the disease. I look forward to supporting the charity in its aims to bring a positive change in pancreatic cancer.”

As well as supporting the charity in raising awareness, Matt will be raising funds as well.  Matt’s first challenge for the charity is the Bob Graham Round.  Starting in Keswick in the Lake District, the challenge involves walking 100km over 42 peaks in 24 hours.

Matt says: “As a family, we spent a lot of time in the Lake District walking and competing in races across the lakes.  The Bob Graham Round takes in many of the peaks that I have walked  and raced up so brings back, great memories.”

“Every day we hear from people who have lost someone to this disease and it highlights how vital our work is. With Matt’s support, we will reach more people and ultimately get more awareness out there.”

Pancreatic Cancer is the UK’s fifth biggest cancer killer and 24 people die a day from the disease. The 5 year survival rate is just 4%, a figure which has barely changed in over 40 years. Most pancreatic cancer patients are diagnosed too late. Pancreatic Cancer Action is determined to get more patients diagnosed early and in time for life-saving surgery, by funding research into early diagnosis, educating medical professionals and raising awareness of signs and symptoms.

To donate towards his fundraising challenge, please follow this link: http://uk.virginmoneygiving.com/fundraiser-web/fundraiser/showFundraiserPage.action?userUrl=matts-bob-graham-round&faId=597604&isTeam=false