Cycling Coast to Coast in memory of ‘Nanny Tay’ 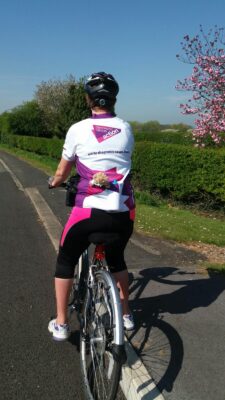 Denise Taylor, from Beverly, is cycling 136 miles over 3 days in the Coast to Coast cycling challenge on 10th August to raises funds and awareness for Pancreatic Cancer Action.

Denise has been motivated to take part in this challenge in memory of mother-in-law, ‘Nanny Tay’, she tells her story in her own words:

MY STORY is about Jillian Frances Taylor…my mother-in-law (Nanny Tay).

She welcomed me in from the day she met me so I’d known her over 20 years. She was always supportive, always interested and always there for a chat and a cuppa.

Over the time we knew each other we went through many things that families do – her divorce, house moves, deaths and births!

Her grandchildren (all of them) were the absolute love of her life – second to her beloved garden and dressmaking.

The kids couldn’t get enough of her – her funny stories, the gossip she knew and the interest she took in them. She wanted to be at anything and everything they were doing from sports days to dance shows, assemblies and choir.

She was a kind of mentor to everyone, but she didn’t do it in a bossy way she just encouraged and had that way that you wanted to chat through things.

Years ago a family friend had died and I was dreading going to the funeral, I explained this to Nanny Tay …and I burst out crying and she just hugged me. Letting that emotion go helped me get through the funeral…her acts of kindness helped you through…the day, the week and the year.

Strangely I can’t remember the specific reason she went into hospital…they just said it was tests. Thinking back to be honest, she didn’t mention going to the loo or not being able to to go the loo…we just said “Oooohh Nannn” and didn’t think anything of it.

The day I remember with clarity is the day I was sat in the car on a cold February tea time waiting for my daughter to finish her singing lesson. My husband called to say Nanna Tay had pancreatic cancer and they were going to do chemotherapy but her condition was terminal. She was diagnosed in January 2011.

I gasped, I cried, but being ‘responsible’ parents we agreed I wouldn’t say anything to my daughter until I could bring her home and he would tell her and her sister together.

So I had to drive back with that burden, that knowledge, that punch in the gut knowing that the kid’s lives were going to change for ever in a very short time.

But do you know…yes we cried buckets but we cried together and from that moment we were so honest with them. We didn’t hide what was going on – it was the only way forward. The kid’s saw us crying lots and lots which was unusual…but I suppose it gave the message ‘if it makes you sad cry’, it’s OK because mum and dad are. 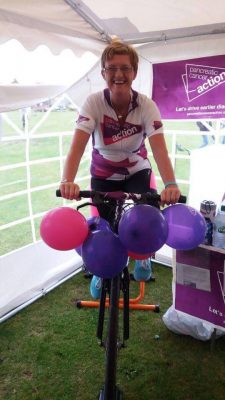 that. I was so pleased to help in some way. Everybody pulled together – friends were there for her and us and McMillan Nurses would visit.

Even up until the Easter it was like – No, she’s going to be OK – she seems OK but, then the chemo wasn’t working. She was so sick and really she just couldn’t eat hardly anything.

She was in and out of hospital but was clear she wanted to come home to die. So we worked with the nurses to get everything into place as pretty much we organised a rota to work alongside carers, we worked, kids went to school, we went to nannas – we carried on.

We were there for her, she knew as she’d always been there for us.

So I knew I wanted to fundraiser for Pancreatic Cancer Action, but I needed to do it when the time was right, when I felt stronger. So that’s why I’m doing the Coast to Coast – to fundraise, to raise awareness, to give something back.

If you would like to support Denise Taylor in her challenge you can sponsor her here: https://www.justgiving.com/fundraising/Denise-Taylor6