A cycle ride with a difference!

Here is a guest blog from Jim Clark about taking part in the Nightrider cycle event with his sister, Juliette, cousin and two friends last June.  They raised an astonishing £5,030!

Jim shares his experience of the exciting ride as well as the sad story of finding out his dad was diagnosed with pancreatic cancer, just twelve months after losing his mum. 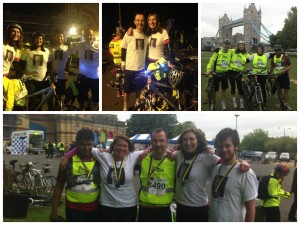 On a clear, cool night on Sunday 9th June 2013, at precisely 12:20am, we, along with our cousin and two friends, embarked on the 100km Nightrider bike ride around London. We set off with some feelings of trepidation, and finished it feeling like we’d really achieved something great in memory of our wonderful dad, John, who had passed away due to pancreatic cancer just two months earlier.

Not much more than a year ago we had barely heard of this dreadful disease, but in late 2012, less than twelve months after losing our mum, our dad was diagnosed with late stage pancreatic cancer and told that he had only approximately six months to live. We, our sister Michelle and her son Andrew, were all devastated. Dad had mentioned some stomach discomfort – bad indigestion, bloating and wind – in early August, just before he was to travel to Australia on a six-week holiday of a lifetime. Unfortunately, by the time he returned home, his condition had got much worse, and he had been told by a doctor there that he may have cancer. By the time he’d had the necessary scans and tests to diagnose pancreatic cancer back here in the UK, it was much too late to be treatable. Unfortunately Dad was in that large majority of pancreatic cancer sufferers for whom diagnosis comes too late for any treatment to significantly reduce discomfort or to extend life meaningfully.

We decided to do the bike ride for a number of reasons: in memory of our dad, to raise the profile of pancreatic cancer among our friends at least, and to raise funds for Pancreatic Cancer Action who are doing some fantastic work to raise awareness of this awful disease. Our dad was always trying to help others, and the idea that his suffering may indirectly lead to help for others in the future offers us some consolation as we come to terms with our loss.

Neither of us were in any way serious cyclists or owned a particularly great bike for a long ride on London’s roads, so we both took the opportunity to buy something more roadworthy.  Our cousin borrowed a bike, another one bought the same bike as we did (he did all the research actually!), and another had thinner tyres fitted to her mountain bike – so not quite beg, borrow or steal, but not far off! The atmosphere on the night was great – thousands of people setting out to enjoy themselves for a multitude of great causes – so all very friendly, and with all levels of cyclists participating. To ride past some of London’s greatest sights at night was fantastic: highlights were crossing the Thames and seeing St Paul’s Cathedral, cycling through Westminster and – the best bit – cycling through lots of extremely calm streets as the sun was coming up, in a city that is seemingly always buzzing with life.

We got a huge amount of satisfaction out of doing the ride, made that much easier by our cousin and friends doing it with us, and were overwhelmed by the generosity of the many donations from friends and family. It really helped to keep the memory of our dad alive in a very positive way. We would only encourage anyone to do it – when your tired legs reach Alexandra Palace at 8:30 in the morning (or earlier if you don’t stop off to eat quite so many snacks as we did!) and you’re rewarded with a hot cup of tea and a bacon buttie, it will all seem worth it!

Nightrider is an exciting way to raise funds whilst exploring London by bicycle at night!   Set off from either Crystal Palace or Alexandra Palace and follow a 100km circular route past over fifty of London’s most famous landmarks.  If interested, you can sign up Nightrider 2014 today.