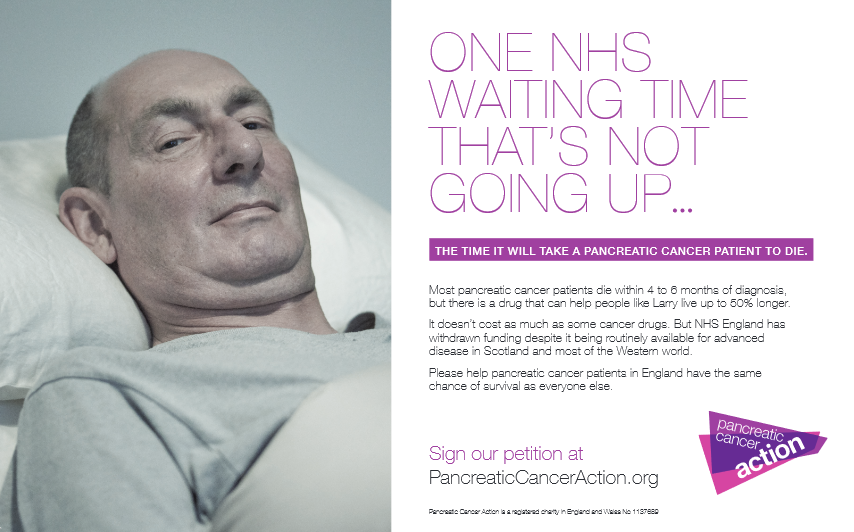 A powerful advertising campaign launched on 4th November by Pancreatic Cancer Action, ultimately aims to get the Department of Health and NHS England to reinstate Abraxane®, a breakthrough life-extending drug for the treatment of advanced pancreatic cancer that has been removed from the Cancer Drugs Fund.   Last week, NICE also announced that they were not going to approve the use of Abraxane® for NHS patients in England.

The printed adverts feature Larry Rees, a terminal pancreatic cancer patient, who has benefitted from the drug.  With the headline ‘One NHS waiting time that’s not going up…the time it will take a pancreatic cancer patient to die’, it highlights the benefit of Abraxane® as a treatment option and the fact that English patients are left significantly disadvantaged, with patients in Scotland and Wales being able to routinely access the drug on the NHS.

There was also a demonstration today outside the Department of Health offices, with two advertising vans promoting the powerful visual campaign.  Demonstrators, including members from the Pancreatic Cancer Action team, will be calling for the public to support their campaign by signing a government petition initiated by Pancreatic Cancer Action, which can be found here.

“Pancreatic cancer has been identified as a disease with a vast unmet need and, due to its poor prognosis and lack of improvement in survival for over four decades, needs to be assessed differently to other cancers by review bodies, such as NICE and the Cancer Drugs Fund,” says Ali.  “We feel this campaign is necessary to allow patients in England access to an effective treatment which is readily available on the NHS in Scotland and Wales and is also available to patients in most of the developed world.“

The public can support the campaign by signing the government petition set up by the charity, which is found here.

Pancreatic Cancer Action is committed to working towards improving earlier diagnosis and better treatments for pancreatic cancer.  The charity is focused on educating the public and medical community as well as funding research.  They also campaign for more funding from the government into research, which currently stands at just over one per cent of all cancer research funding.