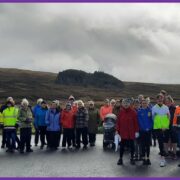 “Unfortunately, they still can’t operate on me as my tumour cuffs the main artery”

For most pancreatic cancer patients, getting treatment & support is as simple as heading down to your local hospital to receive it. For Catherine Laing, she has to fly from the Isle of North Uist to mainland Scotland to receive hers. Read her story below.

Up to two months before her diagnosis, Catherine Laing was experiencing symptoms such as tummy pain, mid-back pain, as well as suffering weight loss without trying. Originally, her symptoms were put down to inflammation. It was at a CT scan that the true rollercoaster ride began.

“Following a CT scan, I was told there was a tumour on my pancreas, then told it was inoperable, and then told via video link the prognosis: Three weeks to several months to live. If I had chemotherapy, maybe it could be up to 18 months.

I started on Creon and MST. After three months of chemo, the CT scan showed no change. The tumour markers results were lost twice. A review concluded a watch and wait regime.

I decided to reduce and cut out some of the meds. I also suffered a very bad chemotherapy leak.

I faced some discomfort whilst eating, yet my weight has remained stable. I have changed my diet, which has played a big part in my well-being.

I contacted “Move More for Cancer” as I was aware I was going to lose my mobility if I just sat back and kept taking morphine. I made the decision to come off the meds and it was hard. I started walking, very short distances to begin with, between two passing places, then three, and built up to a mile. It was at this point that I decided to raise funds for Pancreatic Cancer Action and also for Cancer Research.

I organised a five-kilometre walk and was joined by about forty people, raising more than £6,000 between these two charities. The walk coincided with the anniversary of the Battle of Stirling Bridge in 1297. For me, that was symbolic. I’m trying to come up with an idea for a further fundraiser, but things are difficult just now with this plague of COVID.

Although the chemo burn cannot be treated, it has subsided somewhat. Another CT scan is planned for the next two months. Hopefully, it hasn’t grown or spread. Unfortunately, they still can’t operate on me as my tumour cuffs the main artery.”