Sharron describes how her husband was diagnosed with necrotizing pancreatitis in 2016, from which he miraculously recovered. However, after experiencing months of crippling pain, Keith was diagnosed with In-operable pancreatic cancer and sadly lost his fight in May 2018.

I have been asked by PCA to write about my PanCan Warrior. His name is Keith Rochester. My amazing husband. 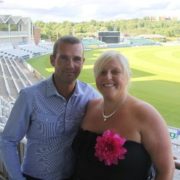 November 2015 Keith had just been given the all clear at his “Age 40 NHS Health Check” We had had a very bad year with 1 thing and another so we decided to go to Cuba to get off 2016 on a great foot – surely this year couldn’t be any worse. However 9 days into the holiday Keith became critically ill. After suffering severe abdominal pain, radiating to his back, his abdomen swelled up, dizzy, falling over, unable to eat, drink, pee or poop, Keith was rushed to hospital. Keith underwent tests and scans but the medics couldn’t confirm what was wrong so they carried out emergency surgery. Keith was diagnosed with necrotising pancreatitis. He had the onset of multi organ failure, he had less than 1% chance of survival and I was told to expect him to die. He remained in ICU for 3 months during where the Cuban medics were nothing short of incredible. We all fought, hard, hour by hour, day by day, night after night. Keith had every complication going. He had a tracheostomy fitted, suffered with fistulas, pancreatic cysts, weeks of gastric bleeding, huge bed sores, pneumonia and countless infections. But all our hard work was not in vain and after 3 months we were instructed to go to a Cuban hotel for recuperation and to build up with good foods, obviously all pancreatitis driven – very difficult in a foreign country. But we continued to fight hard and my miracle man was allowed to fly home May 2016.

Keith was dubbed miracle man – a name so fitting. We immediately attended the specialist pancreatitis unit in Newcastle. We embraced our new life together and Keith showed amazing tenacity and determination and chose to completely change his lifestyle. Never touched a drop of alcohol or smoked a cigarette since his hospital admission January 2016. He was given Creon to take with every meal or snack, being told that he was allowed to eat anything he fancied. We have always eaten healthy food choices, but Keith loved sweets, crisps and ice cream but these would cause pain – it was definitely trial and error! Keith had a huge double abdominal hernia from where the Cuban medics had saved his life, but it was so uncomfortable he just couldn’t live with it. So after many consultations with his medics he decided to undergo major abdominal surgery. He returned home Christmas Eve 2016. Keith was a force to be reckoned with, he knew everything he wanted and did it. However due to complications and infections he was back in hospital again Boxing Day. This time more pneumonia and sepsis. Keith fought hard and won this battle again. He spent months building himself up, with a few knocks backs along the way.

Following months of crippling pain, scans and countless hospital appointments devastation followed in July 2017 when Keith was diagnosed with an inoperable Pancreatic Cancer tumour. Our world was blown apart. We always knew this was a very high possibility given everything he had been through. His body was weak. We were open and honest about the survival rates as well as all the medical options available. Keith decided to fight whilst trying to have the best quality of life possible. Understanding the risks involved he decided not to have chemotherapy. We spent hours researching, Keith took all natural supplements including CBD and THC cannabis oils, coffee enemas for pain relief and toxin removal, as well as an abundance of supplements and holistic treatments such as Reiki and massages. All his food was as organic as possible, massively reduced sugar intake, drank gallons of water, he embraced everything. We went to music concerts, chips at the beach, playing in the arcades at our caravan in Northumberland coast, short walks with Erica, plenty of fresh air. Every single day we tried to do something – making memories. We even renewed our wedding vows 16th November 2017 in our local Church, followed by a small intimate gathering afterwards, but then threw a big Celebration of Life party, raising nearly £1500 for PCUK.

All his Consultants were blown away at his bodies response. He remained so strong for such a long time. The growth of the tumour slowed down, it was not as fast growing as statistics showed. Knowing all his options and chances, he choose to have a PEG tube fitted December 2017 which helped massively with nutrition and hydration and was an integral part to his daily routine. Nothing phased him. But it was a very difficult time for everyone, but all the medics and all his friends and family supported him fully in the path he chose. We never gave up. I even wrote to other professors, other specialist places, looked for clinical trials home and abroad, everything.

But despite everything the tumour continued to grow. It was pressing on his celiac plexus (a block of nerves, at the top of the abdomen) so following consultants advice Keith chose to have radiation therapy in February, purely for pain relief. But after 3 consecutive daily treatments (out of 4 booked) Keith immediately took poorly and had a horrific 24 hours, resulting in him being admitted to our local hospice. Keith was critical. He had yet another bout of pneumonia and other various complications but he was still fighting. He continued with his nutrition and protocols and another miracle happened, he pulled through again, absolutely incredible. Between lots of rest and sleep, we would just sit for hours talking, laughing, crying, watching tv for hours. All of this was possible due to the natural medications. We finally returned home 2 weeks later where we settled back into our homely routine but heartbreak and devastation was to follow and Keith tragically lost his fight 11th May 2018.

Despite losing his fight, Keith will always be my hero. He is my PANCAN warrior. He gave life everything. Always. And made me promise I would do the same. So, here I am, the wife of an amazing man who tragically wasn’t a survivor of Pancreatic Cancer. I can’t sugar coat it. My heart is broken into a million pieces. The pain is deep and very raw. I have lost my soul mate. The man who I thought I was going to spend the rest of my life with. But I hope and pray that by raising awareness others do not have to suffer the way Keith did. Or the way I am. I can honestly say losing the love of your life and watching them suffer is horrific, something no one should have to endure. So I have decided to be open and honest and tell Keith’s story in order to raise awareness. Hoping to help people see that small changes can impact good health. Curing any cancer is such a difficult battle, but Pancreatic Cancer is notoriously difficult. We all need to look for warning signs, make better lifestyle choices and reduce stress. But in order to help others I need to help myself first.

Keith made me promise to get myself well and be happy. He is inspiring me to work as hard as I can to take my life back. 4 years ago I was diagnosed with CFS and ME and recently Fibromyalgia, PTSF and Myofascial pain syndrome. I have now applied the same strategies to my recovery. Researching and understanding my illness and trying all holistic therapies, natural foods and supplements and a basic lifestyle. I am truly hoping that once I am well I can then go on to help others and raise more awareness.

Positivity is everything but the fact is Pancreatic cancer is a killer. It is vital that we all help spread the word. Prevention is key. Researching treatments and early screening both vital.

Despite losing his fight, Keith will always be my hero. He is my PANCAN warrior. ALWAYS. ? 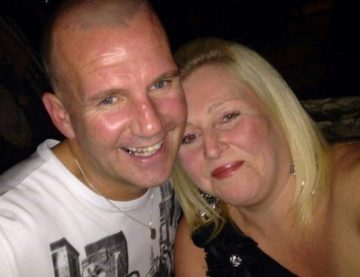