Sam tells the story, in his own words, of the journey that led to his mum’s diagnosis for pancreatic cancer, from which she sadly died in September 2013, just four days after diagnosis. 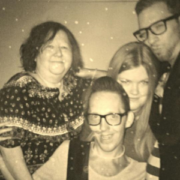 We lost our hero, our world, our mum to this horrible cancer on 9th September 2013. She was only 67 and she would have been 68 on the 25th September. It is so hard without her. We had planned for her to go to see The Mousetrap in a theatre near to us but she never made it and we never told her, it was a surprise. I’m sure she knows now.

In her last few years she was a busy housewife, who loved doing the gardening (we had started to revamp the garden), seeing her friends, going to the theatre, reading and just spending time with her family. She had cats and a dog who she loved dearly. She was always an upbeat mega tower of support for us all and an amazing friend and mum, she was a hero.

She had been suffering from diabetes for years and had jaundice on and off the last few years of her life, but nothing was picked up.

She had started to lose her appetite in June 2013. This got worse and worse and it became a daily battle to try and get her to eat as she always felt sick. Everything to do with food made her feel ill. She was given anti-depressants, and suggested that losing her appetite and losing over one stone in weight was due to depression.

By the end of July, she developed jaundice that covered nearly her whole body, it was horrendous.

She had already been complaining of a bad back to doctors since September 2012, and all she was given was some physiotherapy sheets with exercises to do at home. This didn’t really help.

She was exhausted but we put that down to lack of food as at this point we knew nothing of the symptoms of pancreatic cancer. Her stools in the last couple of weeks, while she was still at home, were horrendous and looked typical of what we now know is a symptom.

My sister, brother and I had to care for her in every way during her last few days of her being at home, as she was so weak and could not do anything. This unfortunately included getting her to the bathroom and washing her every day as she never made it in time in the morning and we also had to feed her and get her back to bed.
So with that we looked after her and did the best we could for her, regularly calling doctors out, again and again! She was finally admitted to hospital at the end of August and she was fighting for her life even then.

She was in hospital for 10 days, and we found out on the 6th day it was pancreatic cancer. On the 7th day we were told she would have only 4-6 months and that in rare cases people can survive up to 2 years with this cancer. Leaving the hospital that night was very hard and sad. Finding out your best friend and mother had terminal cancer was devastating.

We tried our hardest to keep it together, when saying goodbye she saw that I was a little sad still and asked why? I replied, ‘the house isn’t the same without you there!’

‘I’m just home sick I guess!’ (This being the 1st time my mum had to stay in hospital overnight since having me 25 years ago). This was on the last day we saw her, only two days after we were given her diagnosis, she gave us the best day that she could, she was such an amazing, strong woman!

On Monday morning at 6.28, ten days since she was admitted, I received a call from the hospital, saying she wasn’t doing well, and they said we all had to get there as soon as possible to see her. It was a complete shock because after coming home on Sunday, my brother and I decided we’d go back to work on Monday after seeing our mum making improvements. To receive this call was absolutely devastating! We got to the hospital about ten minutes after my mum had passed. I couldn’t believe it! I went in to shock and collapsed! It’s still hard to get my head round it, still to this day which is five months on now.

It’s still so raw. We felt let down by doctors who didn’t pick it up earlier.

I am determined to raise awareness of this awful cancer so that other patients and relatives do not have to go through what we went through with my mum.