Linda Reardon tells the story of her mum Lynn Ball, who was diagnosed in 2010 with inoperable pancreatic cancer, and sadly passed away just 7 weeks later. 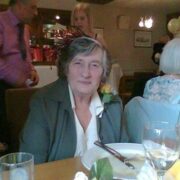 “They say lightening never strikes twice in the same place, and that is true. Lightening struck my family three times already!

In November 2004, after having non-specific stomach and back problems all through the summer, my cousin Noel was diagnosed with pancreatic cancer and was given two years to live. He passed away two weeks later. He was my Mother’s cousin and lived in Scotland, and my Mum was shocked, they were very close in age. At the time, my Uncle Robert, my Mother’s brother, was in remission after battling cancer of the lymph nodes. During the summer of 2005 he became ill again, stomach pain, back pain, and finally jaundice. He too was diagnosed with pancreatic cancer and underwent two courses of chemotherapy. He was told there was nothing else that could be done, but they felt that he would survive for 10 years.

Sadly he passed away in January 2006. My Mum was devastated. She was very close to her brother, but to lose two close family members shocked her to her core. We are talking about two family members who were otherwise fit and healthy, didn’t smoke and didn’t drink. I grieved for them both, and worried that it was something that could take any other family members.

At that time I started looking for information on pancreatic cancer on the Internet and could not find anything that said it could be hereditary, my concerns that it would take other family members passed and we got on with life.

In 2007 Mum started having stomach and bowel problems. She had various tests, never really thinking about pancreatic cancer, and in 2008 she was diagnosed with Diabetes. This was closely followed by intense itching over her arms and legs. At first it was felt it was a reaction to the medication and she would settle down, then they told her it could be shingles but without a rash. Eventually it was diagnosed as psoriasis and she had more medication. Mum already suffered with high blood pressure and we joked that she was starting to sound like maracas with all the tablets she had to take. Again Mum didn’t smoke and didn’t drink, and until she had had problems with her hips had been very fit and healthy and actually did a lot of running.

At the beginning of 2009 Mum started getting a lot of pain in her stomach, going around to her back. Visits to the hospital started all over again, and they decided that the problem was with her cervix, they gave her a donut shaped rubber disc, which was inserted. This caused Mum more pain than the original stomach pain, coupled with the fact that the donut kept flipping over and had to be reinserted on several occasions, causing much distress for her. Over the summer and into the autumn, Mum was back and forth to the hospital, they thought she had IBS, something I have suffered with for years, yet changing her diet didn’t seem to help. In the August all the family got together for my niece’s wedding. Mum confided in me that she wasn’t enjoying her food, everything was making her stomach hurt, but she did say if it kept happening she would go to the doctors. The problem with Mum was she didn’t like to be a bother, so if she thought it was something simple she wouldn’t tell the Doctor. These bouts of pain kept coming. In the run up to Christmas she started having stomach bugs, several in succession. Mum passed this off as “something she had eaten”, and then it was “swine flu”. At Christmas, Mum looked dreadful, she had lost so much weight, couldn’t keep anything down, and promised my sister and I that she would see the doctor straight after the Christmas holidays. Things speeded up after New Year. She rang me one night to say that she was now bleeding from her bowel and would go and see the doctor the next day. True to her word she went to the doctors, was rushed into hospital and a series of tests performed. She was already jaundiced and severely dehydrated.

The first lot of tests came back and the doctors told my Dad that there was a blockage in her stomach and they would run further tests to see if they could operate. Mum’s stomach was very swollen and this was confirmed as fluid, they would have to drain this before they could check if there were any other underlying problems. For the next two weeks it was a routine of draining the fluid, carrying out more scans, draining more fluid etc, one day alone they drained 10 litres from her, and in honesty, she looked so much better that day. The next day the fluid was back.

On the 19th January we were given the news that quite literally threw the family into shock. I had taken one of my daughters up to see her, we went straight from work. When we got to the hospital Mum was very tearful, she just said there were tumours in her pancreas, they couldn’t do anything it was too far gone, no chemo, no radiotherapy, no surgery, nothing. They were going to make her comfortable as they could. I will never forget how I felt at that moment. Mum was in an old hospital, not much room between the beds. She had her dinner on a table and I couldn’t get near her. She cried and all I could do was tell her not to worry, we would beat this, and stroke her hand. My daughter was white but so brave and didn’t cry, just chatted to her beloved Nan. My Dad arrived shortly after, made a big fuss of Emma as he hadn’t seen her for a few months, we decided to leave Mum to tell him the news on their own and we went for a coffee and to phone the rest of the family. I just about got my daughter off the ward and she collapsed into tears. What do you tell your child, even when she is a grown up, when you feel so much pain and anger yourself?”