Julie Stringer describes the difficulties in getting a diagnosis for her mum Jacqueline, after she began to experience a number of symptoms including jaundice. Shockingly Jacqueline wasn’t diagnosed with pancreatic cancer until she had sadly passed away. 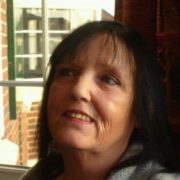 My mum had been ill from when I was around 13 years old, first with skin cancer and a few years later with breast cancer. She fought hard against both and with the love and support of myself and my three brothers Shane, Kieran and Robert, she seemed to be on the mend until she had a stroke in 2005.

The stroke took its toll on mum as she had to use a wheelchair to get around but she managed and would do her best for her grandchildren.

Mum had also suffered with gall stones which caused her great pain and eventually in 2009 she had her gall bladder removed…. this was when my mum began to slowly disappear.

The operation wasn’t a great success as my mum had to have a stint put in and she seemed to still be in pain, had jaundice and along with this she found it difficult to keep food in and this affected her independence as she would have accidents when out and about.

She became tired and wouldn’t go out much, instead would stay indoors and watch TV with my son Olli.

She was at the doctors constantly and was being prescribed all sorts of medication for the pain, the visits to the doctors then changed to visits to the hospital. Mum would become confused, collapse and became extremely weak and was admitted on several occasions to hospital but still we did not know why.

Mum called me to say she was in hospital again; I went up immediately with my son to so see her.

She was so confused, seeing people that were not there and she was talking gibberish. I stayed as long as I could and then kissed her goodbye, as I needed to get my son home for bed. This was the last time I would see my mum conscious.

Over the next few days I was unable to see my mum as I had a throat infection and the hospital would not allow me to visit, this was when my mum began to slip away from us.

She needed oxygen more and more until the hospital decided to induce my mum into a coma and each time I called I was told “she is stable but critical”, what does that even mean?

Eventually I was allowed to visit and what I saw broke my heart. There lay my mum in bed, yellow, wired up to life support – I approached her and as I looked at her eyes glazing over I cried, I knew that I was losing my mum.

The doctors took tests but did not seem to know what was wrong with my mum; we asked if it could be pancreatic cancer as our uncle had passed away from this. They weren’t sure.

We spent Christmas and New year longing for our mum to be better but knowing in our hearts that we were losing her.

Sunday 2nd January 2011 at 5am I had the call, the hospital said mum didn’t have long.

When we arrived we were all ushered into a room with the consultants and doctors “we have tried all that we can but I’m afraid there is nothing else we can do for your mum. We are legally obliged to stop giving her treatment from now on”. That was it. We had to say goodbye to our beautiful mum. My brothers and I asked how long she would last once the life support had been turned off and were told an hour or so.

At 9 am all life support was removed from our mum and we sat with our dad around our mums bed, loving her and talking about our lives together.

I lay on my mums shoulder and cuddled up to her on the bed, hoping that she could feel me, hear me one last time.

At 3.40pm as I whispered, “I love you” one last time in our mums ear she slipped away.

We still did not know why…until the post mortem which informed us that our mum had indeed died of pancreatic cancer.

Why didn’t anyone know what was wrong with her?

As I write this now I am still heartbroken at losing our mum, my best friend. I have a hole in my heart that can never be filled.

We all feel so let down by the hospital. Why didn’t they know what was wrong?

We need to raise more awareness about this horrific cancer so that others don’t have to feel the pain myself and my brothers feel every Christmas, New Year, birthday or Mothers day.