Beth Carlton describes losing her beloved Dad Christopher, at the age of just 17. 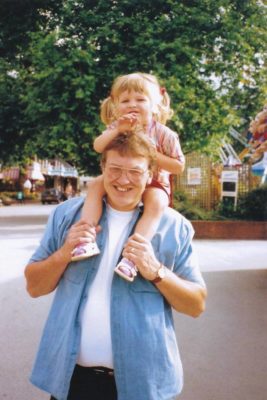 In 2012, my dad was diagnosed with pancreatic cancer, the tumour was 13cm wide. I was at a tender age of 17, and it was the same day that I had passed my driver theory test when my brother and I were told the news. My dad started the strongest chemo there was, which really worked the first time round .. the tumour shrunk to 3cm! Just a few more the doctors said and we could get it removed. He went back on the same chemo, but it stayed the same after that course. His third round, that’s when it started growing… and his 4th round was when they told him they could no longer help. My parents kept this from us to protect us, my dad just wanted to be with us, see us growing up. The last week of his life, he perked up and I knew there was a difference with him, he seemed interested in us after a long time of what felt like the grim reaper sitting in our house.

After he died, it didn’t seem real. I had just turned 19 and my brother was 16. I did the race for life 2 days after and raised £1600 for cancer research, and the day after that was fathers day. Everyone was so supportive, and even though my dad is not here in person I know he is with me and all of my family. He felt guilty because he thought he had brought pain into the house… it wasn’t his fault. This message is to let people know that they are not alone in this! There are millions of people trying to help people like us. People look at me that are my age like I’m some sort of freak, for being so young without a parent but to be honest I’m glad I got the 17 years. He was the best dad I could of dreamed for.

Thank you for reading.