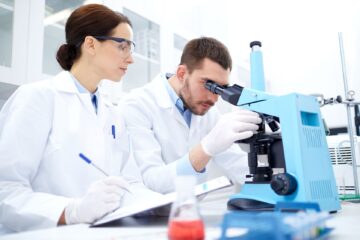 At Pancreatic Cancer Action, we were delighted to hear the news yesterday that Cancer Research UK will be investing £18 million this year into pancreatic cancer research.  Coupled with the research work carried out by other charities into pancreatic cancer, including our Early Diagnosis Challenge Award, this will bring us closer to the scientific discoveries that could have a huge impact on survival rates and treatments.  Read more about CRUK’s increased investment into pancreatic cancer below.

Cancer Research UK has tripled its investment in pancreatic cancer, one of the hardest cancers to treat, since launching its research strategy in 2014 according to new figures published today.

“In 2014 we prioritised increased investment in pancreatic, lung, and oesophageal cancers and brain tumours in our research strategy as survival rates in these cancers remain appallingly low, and they are extremely difficult to treat when diagnosed at a late stage.” – Sir Harpal Kumar, Cancer Research UK

The charity increased spending on pancreatic cancer research – including improving diagnosis and treatment – to £18million in the 2015/16 financial year, tripling the £6million investment in 2013/14.

One of the charity’s aims is to help tackle the rising rates of pancreatic cancer, in particular in women, as well improving poor survival from the disease.

Only one in every 100 pancreatic cancer patients in England and Wales survive their disease for more than 10 years and this has stayed the same since the 1970s.

Worryingly, rates of pancreatic cancer have gone up by nine per cent in the UK over the past decade *.

Over this same period the number of people in the UK dying from pancreatic cancer has increased **.

Figures for England published this month show that pancreatic cancer has the lowest per cent of cases diagnosed at an early stage, with just over one in five (21 per cent) being diagnosed at stage I/II ***.

These Cancer Research UK figures are announced to coincide with new TV advertisements for the “Right Now” campaign ****. The campaign is designed to highlight the personal impact of cancer in a series of 30 second films and outdoor posters which show the experience of patients going through treatment or being told test results.

Cancer Research UK hopes the campaign will highlight that cancer continues to have an emotional and physical impact, and that research is happening right now to develop better treatments and improve survival for people affected by the disease.

Cancer Research UK also wants to offer hope as it increases funding into pancreatic cancer research across the country, ranging from clinical trials to find the best chemotherapy combinations to give patients after surgery, to discovering the faulty genes and molecules that make pancreatic cancer grow and spread.

Professor Biankin now leads a team helping to unearth the genetic and molecular secrets hidden within the biggest collection of pancreatic tumour samples in the world. His findings could lead to better ways of matching therapies to patients, and uncover new avenues for treatment.

Professor Biankin said: “Pancreatic cancer is an inherently aggressive disease and it’s often diagnosed late, which puts it a step ahead of us when we come to treat it. We need to be more ambitious and hit the disease hard and fast with new approaches. We need to diagnose these cancers swiftly so patients can get onto clinical trials which may help them.

“Throughout my career I’ve been determined to increase how much we know about pancreatic cancer. Right now, I’m studying differences in pancreatic cancer cells to find new ways to predict the best treatment for each patient. Increasing the amount of research taking place in the UK allows us to be much more optimistic about the future of beating this cancer.”

Carl, 42, from Leeds, runs a street food business and was diagnosed with pancreatic cancer in 2012. He was a regular at the gym and ate well, but had started to have pains on the right-hand side of his rib cage.

After visiting his GP with jaundice Carl was referred to hospital where he was diagnosed with pancreatic cancer. He had surgery and chemotherapy to treat the disease. Unfortunately his cancer returned in November 2013, this time affecting his liver and he had another three months of chemotherapy. The cancer has returned twice more since and Carl has needed more treatment each time. Carl is currently in remission and having a break from chemotherapy.

Carl appears in one of the Right Now campaign posters. He is asleep in his hospital bed as his mum looks on.

Carl said: “Before cancer happens to you or a loved one you don’t often see inside the hospital, so people have lots of assumptions of what it’s like. I wanted to take part in the Right Now campaign to show the reality of my cancer treatment – it hasn’t always been easy. And I think it’s also important to talk about how Cancer Research UK is helping develop new treatments for people like me in the future, through clinical trials and research.

“It’s encouraging to hear that the charity is investing more in pancreatic cancer so that more patients can take part in clinical trials and scientists can get to the root of the disease. Seeing the charity’s work in action and knowing that it’s growing gives me great hope for the future.”

Sir Harpal Kumar, Cancer Research UK’s chief executive, said: “In 2014 we prioritised increased investment in pancreatic, lung, and oesophageal cancers and brain tumours in our research strategy as survival rates in these cancers remain appallingly low, and they are extremely difficult to treat when diagnosed at a late stage.

“To ensure we make a real difference in these cancers we only fund the best research, as determined by international experts, so it’s a credit to the excellence of our growing team of scientists that we’ve been able to increase our activity in these areas this significantly.”