After my father’s diagnosis with pancreatic cancer I was Googling a lot, trying to find out how long he had and what sorts of things we could expect with this disease. I found these stories helpful, so I am contributing ours for all the other families and patients out there. It’s not meant to be pessimistic–every case is different–but rather give an honest and detailed account of the last few months with this cancer.

Pancreatic cancer doesn’t mess around. My father, Marc, was diagnosed with stage IV pancreatic cancer in August of 2017 after a trip to the ER over shoulder pain. They found the mass on his liver while doing CT scans of his shoulder. The mass was likely pushing on a nerve. His tumours were located in the tail of his pancreas and had spread to his liver. My father was an engineer and went about trying to defeat his cancer like any other problem—he called it “the biggest problem-solving challenge of my life” and was determined to find a working treatment.

Although I didn’t live in the same state as Marc, I sublet my room and moved in with him and I’m still glad I did this. I was his only child and became his caretaker. Luckily, I had experience as an aide and caretaker, and this training helped me immensely.

Over the course of a few months we visited four oncologists in the U.S., two of them world renowned for prolonging the lives of pancreatic cancer patients. Eventually he chose a private doctor in L.A. who touted a low dose chemotherapy regime. The idea was to keep him on his feet and comfortable for as long as possible. He did one treatment every other week which consisted of three drugs administered intravenously on the first day, followed by oral doses of another chemo medicine on the following five days. The first few treatments went well and he tolerated them well, but during the fourth he began to not tolerate the pills.

Before all his chemo treatment he also had a port placed near his collar bone. A cancer survivor friend had told him that it would make the IVs easier. It seemed useful at first but this ended up hurting him a lot. As he lost more and more weight the port migrated down his chest and the catheter to his artery seemed to pull painfully. The port was also unusable in other hospitals because it wasn’t “certified” by their facilities. He wanted to have it removed but he was too ill by that point to leave his house.

The last four treatments he wasn’t able to complete. He said it felt like getting a really bad case of the flu–nausea mixed with everything hurting. He rarely vomited but stayed nauseous a lot. For this he found eating pickled ginger eased his stomach some. He tried cannabis edibles with CBD and smoking a few times but found that it did very little for any of his symptoms. He also had a pain on the left side of his abdomen that became worse with the treatments, but later it seemed to happen regardless of the chemo. He no longer was able to recover at all between the sessions and stayed at home ill most days. He stopped all chemo after about three months at the end of December.

Because he could no longer tolerate the chemo that the doc in L.A. was prescribing he decided to seek out a doctor in Houston, Texas at MD Anderson. We visited there twice, but we were told both times that the treatment his doctor was giving him was not much different than the treatments they had to offer.  He had hoped to get on a clinical trial but his liver function by that point made him ineligible. On our second visit to the Texas doctor he began to bleed a lot in the hotel room in the early morning and ended up in the ER to get the blood loss under control. After that he was told to stop taking all NSAIDs because they were making him bleed, but these had been his go-to for his abdomen pain. At that point the doctor told him he had only a few weeks to live, and that turned out to be correct.

At some point in late December, Marc became less able to digest food. He became so constipated that he went through several laxatives a day. In mid-January he went on hospice so that he could get pain management for his side and stomach pain. Over the month of January and early February his stomach became extremely bloated and he was able to eat less and less. He said that every time he ate a little it felt like he had just eaten the biggest meal of his life and that the feeling of fullness was extremely intense. I had a very hard time convincing him to eat, but he loved scrambled eggs and bacon and still tried to eat them. By the end I was lucky if I got him to eat a very small meal once a day. It was hard to determine whether to encourage him to eat or not because every bit of sugar would feed the cancerous tumors. Because of this I offered him snacks and food every few hours but didn’t push them towards the end. Eating helped him feel less weak for a little while and enabled him to engage a little more, but it caused him to feel terrible.

Many years prior to his cancer, Marc had been diagnosed with type II diabetes, and over the course of the one or two years before his diagnosis with cancer his A1C increased dramatically. As the tumours became larger his pancreas essentially stopped working and so he had to increase his insulin and diabetes meds a lot. He also tried taking enzymes to help digest the food, but they didn’t work very well for him for more than a couple days. The last month or so of his life his blood glucose was not well controlled and spiked very high a few times. Luckily having high blood sugar never bothered him, so when it spiked to over 500 he didn’t feel it.

Despite all this, Marc still hoped that he would be able to return to work until the very end. He loved his job as an electrical engineer and spoke with his co-workers, reassuring them he’d return after a few months. His main hobby was re-building vacuum tube hi-fi stereo systems, which he did get to do a little bit before he became too sick. 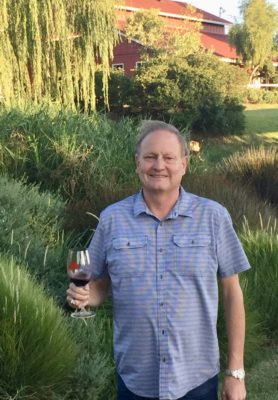 Hospice helped us a lot and I strongly recommend it because it allows for more focused care; a nurse and doctor on call helped us immensely. But the strong pain medications coupled with the effects of the cancer itself made his cognitive skills diminish over his last month. His memory had been very sharp but it declined a lot, and eventually he wasn’t able to speak coherently. He also experienced frequent shortness of breath and often told me that he felt like he was being smothered. The hospice doctor told him that it was his stomach pushing on his lungs. Eventually he was sleeping most of the day. He had to move to the couch so he could stay upright in order to breathe.  This also helped to decrease the pain in his side. A couple days before his death he lost the ability to walk without a lot of assistance, and by the 10th of February he began actively dying. He passed away that same evening with me at his side. Marc was 59 years old.

Marc was a great father to me. He took me travelling as a kid and taught me a lot about life. He raised me less like a “daughter” and more like a person he was sending out into the world to be intellectually curious and adventurous to no end. He travelled extensively in his life and being originally from the South, he loved great food. He was one of the most fair and honest people I’ve ever known. Marc believed in social progress and scientific research and will be remembered as someone who knew way too many things to not have been able to upload the data from his brain.

Had it been a better prognosis, I think he could have lived a lot longer—because his will to live was so strong. Between all the doctors we saw, there was not very much difference in their medications. The same medications have been used for decades.