It is officially the end of Pancreatic Cancer Awareness Month 2016 and – thanks to all of you – it has been a huge success!

As well as it being all hands on deck in the Pancreatic Cancer Action office we have seen lots of amazing awareness initiatives taking place all over the country. We would like to say a HUGE thank you to all those who have made November 2016 the most successful Pancreatic Cancer Awareness Month in the UK so far.

We have had some incredible media coverage over the month starting with a brilliant article in the Daily Mail on the first day of awareness month featuring CEO, Ali Stunt’s story. Lots of our lovely supporters have also been sharing their story with the media including Ceridwen Maddock Jones who appeared on London Live and regional rep for Northern Ireland Kerry Irvine was featured in the Daily Mirror as one of Lidl’s local heroes!

Whats more, on World Pancreatic Cancer Day Ali Stunt, along with our Patron Dr Hilary Jones and pancreatic cancer survivor Ceridwen, took part in over 20 radio interviews raising awareness of the signs and symptoms of pancreatic cancer. See below for the podcast! 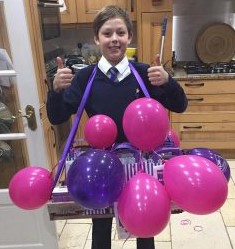 We have had a record number of people take part in our Turn It Purple campaign this year. Individuals and organisations all over the UK have been wearing purple at school and in the office, planting purple pansies, holding awareness stands, sharing social media posts and making purple decorations.

Our Turn It Purple campaign has also featured in almost 40 regional papers and magazines this month! We are truly grateful to everyone who has taken part – thank you!

To see photos of all the brilliant things people have been doing – and for inspiration for next year – check out the photo albums on our Turn It Purple Facebook Page. 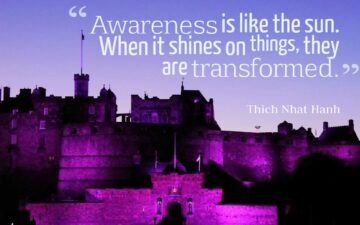 The campaign called for individuals and organisations across the UK to show support for people with pancreatic
cancer and to remember those who have sadly lost their lives to the disease by lighting up focal points in their towns and cities purple.

There was a record number of participants this year with over 100 buildings taking part. People also lit up their houses, work places and even their cars! More information about the campaign, photos and a map of all the buildings that took part, can be found at purplelightsuk.org. 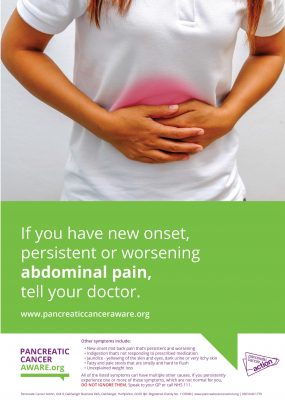 On November 7th, Pancreatic Cancer Action launched a nationwide advertising campaign to raise awareness of the symptoms of pancreatic cancer.

The adverts have been placed in over 220 service stations, railway stations and shopping centres across the UK, as well as in regional and national newspapers and online.

The ads, which feature both male and female models, focus on five key symptoms of pancreatic cancer – abdominal pain, unexplained weight loss, jaundice, smelly stools and mid back pain. The campaign encourages people to visit www.pancreaticcanceraware.org to find out more about the symptoms of pancreatic cancer and to tell their doctor if they are experiencing any of these symptoms. 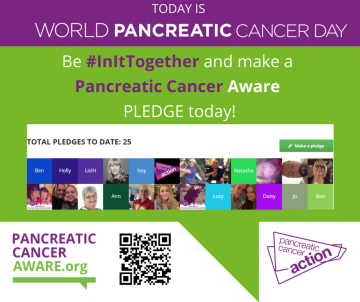 Pancreatic cancer is a severely aggressive type of cancer which is increasingly taking the lives of our loved ones.

We know that knowledge is one of our best tools in the fight against pancreatic cancer and, by increasing awareness of the disease and its devastating impacts, we hope to change the outlook for patients and families by making sure that more people are diagnosed early and in time for life-saving surgery.

Join us to help raise the profile of pancreatic cancer and save lives: sign the pledge. 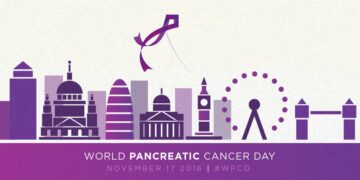 WPCD is a day the whole world unites to raise awareness of pancreatic cancer and create hope for those fighting the disease. This year we were showing the world we are #InItTogether!

Close to 2,000 people joined the Thunderclap which meant that almost 100,000 people on social media all over the world were made aware of World Pancreatic Cancer Day! Hundreds of people also wore purple for the day and posted photos on Facebook, Instagram and Twitter with the #InItTogether hashtag helping to raise awareness amongst their family, friends and colleagues.

You can listen to Ali and Ceridwen’s podcast here…

We thought, what bette 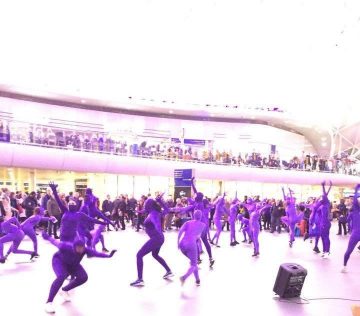 r way to raise awareness of pancreatic cancer on World Pancreatic Cancer Day than to get out there amongst the public and get people talking?!

30 dancers in purple morph suits surprised commuters as they broke out in a spontaneous performance at Kings Cross Station. The Pancreatic Cancer Action team were speaking with the public to find out how much they knew about pancreatic cancer and handing out information encouraging them to visit pancreaticcanceraware.org to learn the symptoms!

There is a desperate need to give more attention to this disease and the flash mob was a great way to show the world we are #InItTogether and to draw attention to pancreatic cancer and the need for greater awareness.

You can read more about the flash mob here.

Launch of the Inequality Report on Pancreatic Cancer 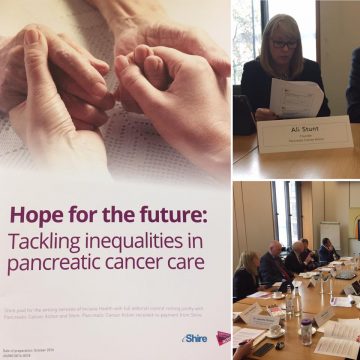 The report shows stark regional and global inequalities in pancreatic cancer which are stalling overall progress in tackling the disease. It also demonstrates how patients with pancreatic cancer continue to be disadvantaged when compared to other forms of cancer.

As well as highlighting these differences, the report proposes a ten-point plan to tackle the inequalities that exist within pancreatic cancer awareness, diagnosis, access to treatment, research and patient experience.

Founder and CEO of PCA, Ali Stunt, was joined by MPs Nic Dakin and Mark Durkan, and experts in the cancer field to lead a meeting discussing the recommendations from the report.

Find out more about the report here. 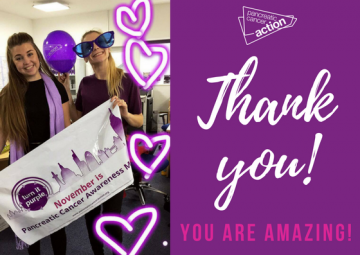 As you can see this November has been very busy! We have raised a huge amount of awareness of pancreatic cancer – which is key to improving survival rates of the disease.

Thank you to everyone for their hard work this month, we really appreciate your dedication to raising awareness and funds to drive change for current and future pancreatic cancer patients.

November is a time when we have the most voice speaking out about pancreatic cancer but raising awareness is important all year long and there are lots of way you can get involved.

Whether it is taking part in a challenge, holding your own fundraising event or awareness stand, sharing your story or sharing social media posts, everything helps our mission of saving lives through early diagnosis.