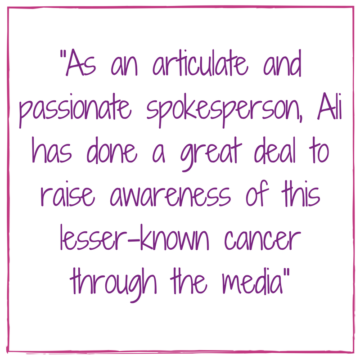 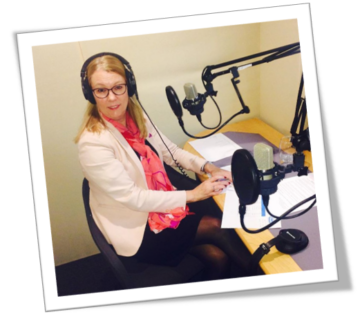 Unlike 90% of the patients diagnosed with pancreatic cancer Ali was lucky: her illness was detected early enough to allow a life-saving operation. In fact, Ali was just one of the 10% of people who are ever able to have life-saving surgery. After undergoing a ‘distal pancreatectomy’ and ‘splenectomy’ where 80% of the pancreas and all of the spleen is removed, Ali received 6 months of combination chemotherapy and then 6 weeks of chemo-radiotherapy treatment.

Since her surgery, scans have shown ‘no evidence of disease,’ and in 2013, six years after her diagnosis, Ali was ‘signed-off’ by her oncologist. Read more of Ali’s pancreatic cancer story.

Having taken the bull by the horns and completed a year of the PhD course at Imperial College, Ali decided academic demands, plus a long daily commute to London, were taking a toll on family life and put it on hold.

But she put this new available time to good use. Having been astounded by the dismal survival rates of pancreatic cancer patients and by the little or no improvement in these rates over the last 40 years, Ali joined forces with others to set up the UK’s very first Pancreatic Cancer Awareness Week in November 2009.

Ali’s passion to encourage early diagnosis for the illness prompted Ali to found Pancreatic Cancer Action (PCA) in August 2010. Finding great support from UK-wide specialists (including her own surgeon and now PCA trustee), Ali initially worked with leading researchers to develop key pancreatic cancer facts and statistics, which are regularly requested by the media at home and abroad.

Ali is in great demand as a Key Opinion Leader and media spokesperson for pancreatic cancer having been interviewed on BBC Breakfast, Good Morning Britain, This Morning, Sky Sunrise, Sky News, ITV News, Newsnight and many regional BBC and ITV news programmes.

She is often invited to do radio interviews across the UK for both BBC and independent radio stations and for international radio stations such as BBC World Service, Melbourne 10 and CBS Canada and is often asked to comment on press articles. Ali has also been featured in articles in many UK national newspapers and in some women’s magazines.

Building a great reputation as a public speaker, Ali is often asked to speak on pancreatic cancer at conferences and other events across the world. You can read more about this here.

Ali has also spoken at corporate events for organisations such as Royal Bank of Scotland, Lockton, Celgene and Baxalta and has assisted in the training events for employees of pharmaceutical companies with an interest in pancreatic cancer in the UK and Europe. More recently Ali has been speaking at various companies as part of Pancreatic Cancer Action’s new Occupational Health and Well-being Initiate.

Ali continues to make improvements to the early diagnosis of pancreatic cancer her mission, and through PCA and its collaborators, she is determined to make the UK’s public and medical profession sit up and listen about pancreatic cancer.